days at the circus 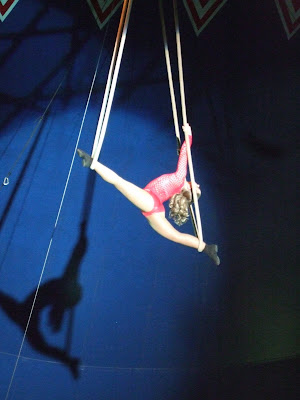 I can't help it.  I've found the circus thrilling ever since I was taken by my aunt and uncle when I was about six years old (Bertram Mills, Olympia, rather later than this film was made),  When the circus arrives locally, as it does every now and then, though with no particular regularity, I find any excuse to go.  I think it's the infectious energy,  the same people who sell popcorn and balloons before the show on stage dancing and swinging on ropes in their sparkly costume, and the longing to share in the promise of moving on to another town, another audience.

So we spent yesterday morning under the Big Top at Zippo's circus in Mile End Park, my mum, brother, niece and I.  It was the first time my niece had been to the circus - my mum too - and they were very excited.  We all applauded till our hands hurt at the acrobats and high wire and jugglers.  Then we came out into the heat of the so far hottest day of the year, joining the crowds of people who were making their way along the canal and into the park.  My niece and I walked home through the park, stopped off to check out on the tadpoles, made sure the horse had a little something to eat. 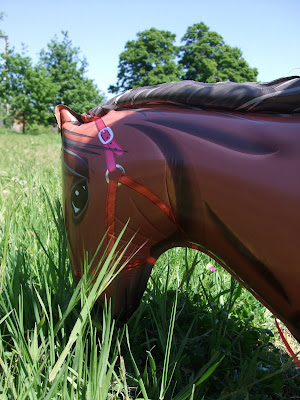 And carried on home. 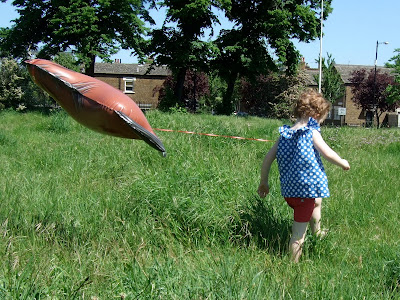 I hope you got to see the budgies! I love Zippos. Some years ago I had ten seats booked for a performance for my daughter's birthday. A couple of days before we were due to go she came down with chicken pox. When I explained this to the box office they sent me a card which entitled us to ten seats for any future performance. Proper customer service. I also love the fact that a few years ago Paul Newman took over as Zippo's ringmaster for a performance.

Oops. Just googled and found out that Newman actually appeared as a clown.

How luck you are to have such things close by. I do remember a circus calling here when I was a teenager, and of course I went to see it! Love the balloon.

I LOVED Bertram Mills' circus when I was younger. My dad used to get free tickets for displaying a poster in his shop . One year I went twice as I went with my junior school as well as with my parents. I was so excited I nearly fainted on the way in and had to sit on the vanity case I had my packed tea in!

I LOVED Bertram Mills' circus when I was younger. My dad used to get free tickets for displaying a poster in his shop . One year I went twice as I went with my junior school as well as with my parents. I was so excited I nearly fainted on the way in and had to sit on the vanity case I had my packed tea in!

I haven't been to the circus for years and would love to go again - unfortunately no kids of the right age nearby to use as an excuse! Will just have to bully one of my friends into it. I also LOVE going to the fair but again my friends are reluctant. There's nothing like the crazy spin of the Waltzer, the bright lights and the screams to set my heart racing.

I have never been to a circus I realise as I read your post. I will look to remedy this, zippos sounds great. I like the balloon and hope you found some tadpoles.