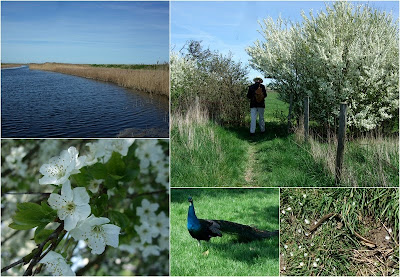 I have calmed down a little now, but yesterday evening I was still buzzing with the excitement of some of the things we had seen at Swale Nature Reserve yesterday.  As we made out way down to Harty Ferry, we stopped at Capel Fleet, a raptor viewing point, and saw a couple of marsh harriers sky dancing - swooping and diving together as  part of their spring mating shenanigans.  Impossible for me to photograph, though I did pick up a feather, murdered by one of the cats when I got home.

We took the same route as we did when we visited Sheppey last autumn, passing through the hedges of wild plums, now in blossom,  that yielded such delicious jam.  It was in this path that I looked down, trying to keep my hat on in the breeze and saw - for the first time ever - a slow worm basking in the sun. All those years of wanting to see a slow worm since coming across it in a Ladybird book (the British Wild Animals one perhaps?) and then to come across such an obliging little beastie, tempted to touch her smooth shiny skin but making do with a snapshot instead.  This one was about a foot long and a little bit thicker in girth than a pencil.   I wanted to bring her home to eat the slugs on the allotment, but ethics prevailed and after a little while I watched her slither off into the grass.

The marshes were alive with birds.  We sat down behind the sea wall, in the sun but away from the wind, and ate our sandwiches taking it all in.  More marsh harriers, solitary this time, gliding leisurely above us, herons, egrets, redshanks, shovellers, mallard, oyster catchers, coots, moorhens, gadwall, lots of geese including some that looked like they had escaped from a farmyard, skylarks ascending, bearded tits, common gulls.  Walking back later on public footpaths we saw about half a dozen lone hares, bounding off in that characteristic zigzag fashion, but no boxing - apparently it's the does dishing out the violence. Then, peacocks in the churchyard.  Not a bad I-Spy score for a day out, I reckon.

When we got home, a bit windworn, we made a quick supper using a handful of sea beet we'd picked mixed in with fresh pasta, anchovies, tomatoes and juice from one and a half lemons and plenty of peppery olive oil (served up in new car boot sale bargain).  The sea beet was just enough to add a bit of bite without overwhelming the dish.

I'd also planned to use some alexanders we found but when I looked for recipes could only find one using the stalks.  Now I'm thinking about the nettle, alexanders and watercress Lenten Potage mentioned by Geoffrey Grigson.  Though maybe that will be one step too far, even if I do want to save up for some new binoculars and a camera.
at 18:45

ooh, that sounds like a perfect day out! I am putting the Swale Nature Reserve on my list for the next Kentish day out!

The marsh harrier situation is extraordinarily heartening. When I was a child we visited an RSPB reserve which was the only place in the country where they were nesting. I can still remember the awe I felt when one flew overhead. I know they are still far from common, but it is really good to hear of people seeing them so frequently.

What a great day out. I love birds of prey. One day last summer there was a commotion in the garden, a young sparrowhawk was sitting on the (now broken) fence and causing havoc.
I've always wanted to happen upon a grass snake...one day.

An excellent score, I'd say. (I used to make little I spy books for our kids when we were travelling long distances).

Slow worms? Not so much.