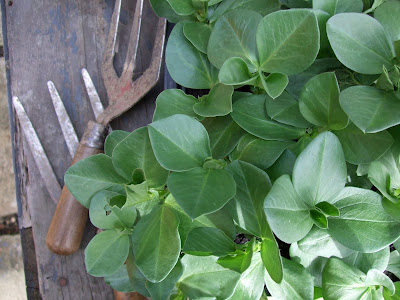 The clocks going forward and the erratic swings in temperature - it was 17 degrees C here in London yesterday - has disoriented us all.  People are walking around in tee shirts,  The blackbirds are singing at four o'clock in the morning.  Geese are honking as they fly past in the early hours.  And I wake up and can't get back to sleep.  It's as if we are all trying to play catch up after our months of hibernation. 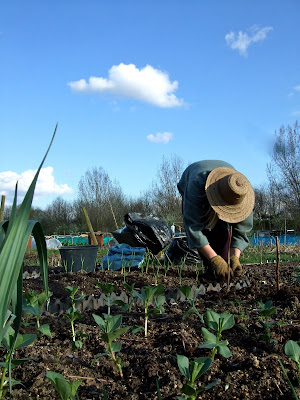 The light evenings and mild weather over the last couple of days have kept up busy down on the plot till late in the evening- cool enough for a jacket but bright enough with the sun low in the sky for a straw hat, little shed on the prairie style.  The potatoes have been in now for a couple of weeks along with a few rows of red onions, and the rocket, lettuce (Red Cos and Oak Leaf) and leeks (Carentan) that I put in at the same time are all up.  Unfortunately I also sowed some of these in the same place as the potatoes in my enthusiasm, and had to re-sow them - ahem.  Beetroot (Boltardy and Detroit),  carrots (Nantes)  and a row of leaf chard went in at the same time.  We also dug in four canes of Autumn Bliss raspberries given to us by a friend and moved a rhubarb plant which miraculously decided to re-remerge in the shed garden when we thought it was well and truly dead.
This weekend I sowed a few rows of brassicas - Romanesco, Cavolo Nero and some calabrese (Comet, a small compact variety) and popped in a row of Kohlrabi ( Superschmeltz, courtesy of Lidl's great selection of seeds) and a couple of rows of mange touts.   Some unknown variety of broad bean plants, too orderly to resist, went in too though I'll be in trouble if they are not a dwarf variety.  We also laid bags and bags of John-made compost, no-dig style, lightly forking it in.  This is our third season here and at last the top layer of earth is starting to look like soil rather than road drillings.  We'll know soon whether it really is soil when we get the results of the contamination tests in a couple of weeks time.
It may make dull reading, for which I apologise, but I rather like the litany of vegetables and it's useful for me to record what has gone in when and what is up.  When I look back at what was happening last year or the one before, I can see how things have changed.  Behind the shed, a sunless cold patch, the aspidistras looked bleak in this space last year along with the buckets and wheelbarrows (not my favourite plant anyway, but we all have to compromise); for the last couple of weeks they have been interspersed with a lovely show of forgotten narcissi, transplanted last year after they finished flowering indoors, with wild garlic just beginning to show at the back. 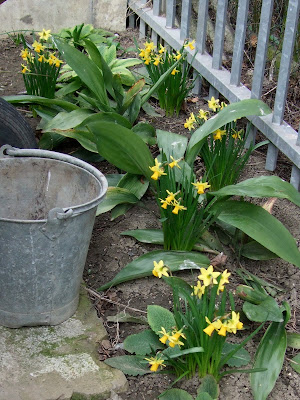 Migrant chives have hopped outside the bed in front of the shed and line much of the pathway. 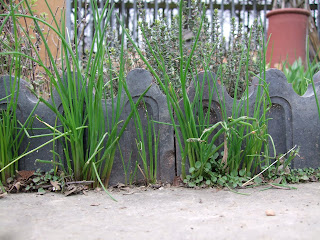 More surprising given how cold it was this year, the asparagus is just beginning to peep out  - this time last year they were about six inches high and almost ready to eat.  This year - hoorah! - we'll be able to cut them for a longer period.. 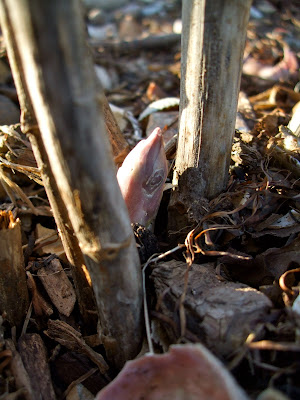 There has been lots of bird activity too.  In the early evening, it is like avian rush hour. John spotted a little willow warbler in the bushes and, with no people around but us,  parakeets and pigeons fly noisily back and forth over the general background of birdsong.  Two visiting ducks make tracks... 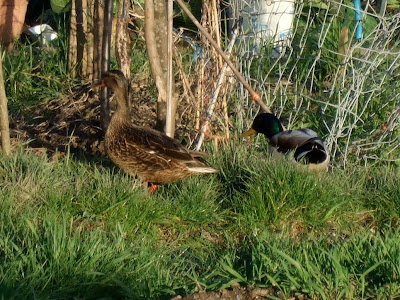 ... and above our heads two new lodgers cackle aways. Don't be fooled by that "two for joy" baloney,  they'd steal your boots if you weren't wearing them. 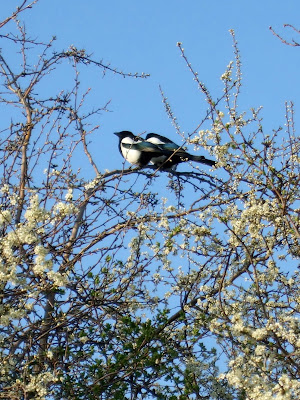 Back home I've been busy sowing my runner and climbing beans (Lady Di and Cosse Violette), some radicchio and Little Gems, aubergines and too many kinds of tomato.  Today I can start sowing my courgettes and patty pans, peppers and basil.  Or,with the birds a bit quieter, I might even be able to squeeze in an hour's shut-eye now that my cup of cocoa has worked its magic.
at 07:00

At the moment we have one lonely daff out in the garden, and it is of course raining. We have been promised better weather though I doubt we'll manage 17 degrees. That'd be a good summer here!!

Oh this is so inspiring! It hasn't been so warm in Sheffield, but you have made me realise how much I am itching to get out and sow some seeds. We don't have an allotment but I'm determined that my three little raised beds in our tiny garden are going to work HARD this year.

You have been productive. And there was me, pleased as punch to have seed potatoes chitting on the window ledge. (See? I even know some of the terminology now).

Not boring at all it looks very promising...Lovely

when it's impossible to garden it's nice to hear about and read about gardening... I take great pleasure in watching Geoff Hamilton's garden programmes on dvd esp Cottage Gardens and also reading Gilbert Whites Natural history of Selbourne the Fat two volume Richard Mabey edited set. His descriptions of vegeatble growing are brilliant.

Thanks so much for stopping by the blog, and your lovely comment. I'm so jealous of your allotment. We try our best in our little garden, but I'm really looking forward to watching your progress, and learning through you, so perhaps we can get better and broaden our scope.