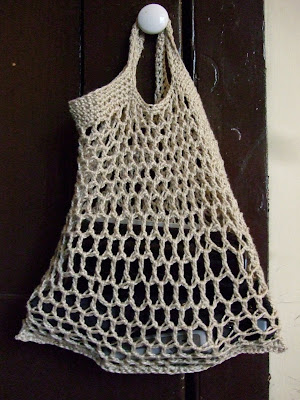 I was keen to participate in the Rattling On's String-Along but was reluctant to make a commitment I might not be able to keep.  I've been pretty much absorbed with making Morsbags and we are now awash here with bags because I seem to have been working on the principle of one for you, one for me (so hard not to want a cloth bag made out of old curtains or fabric from my mum's stash).  But string bags are such lovely things with their magical stretchability and stringy knubbliness and I needed to consolidate my newly acquired crochet skills and put in a bit of practice.  So here is my string bag.  I made most of it last night using this pattern and finished it off on a tube journey this afternoon.  The bargain yarn came from the oddments box at the local sewing shop (one 50g ball of Patons Cotton Perle) so no acquisition guilt either.  I thought it was going to be bigger- it's half full with my specs, a mini brolly, a small notebook, camera and mobile phone, though come to think of it that's quite a lot.  Anyway, I like it  and I'm glad that I strung along even if I missed the deadline - probably because it was not officially on the to do list...
at 23:26 3 comments:

Email ThisBlogThis!Share to TwitterShare to FacebookShare to Pinterest
Labels: craft, too much stuff 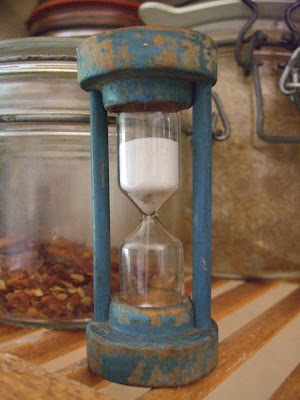 It seems that March has stolen a march on me.  Here we are in the last few days and I haven't got round  to recording progress on the plot, discoveries and outings for ages.  I shouldn't be surprised really because I have found time quite slippery since I stopped working.  I thought I would get much more done, but it turns out that everyday errands, take me much more time than when I fitted them in around the working day.  Journeys to work, ostensibly crowded with people, actually provided the time to observe or think about what I needed to do during the day; the journey home provided a space to relax.  Even without rushing, I used to be able to make breakfast, prepare a packed lunch, put on the bread and get the washing on the line before I went to work.  Now it can take me two hours.

This bending of time perplexed me so much that I began to record what I did in 15 minute blocks - nothing like a good bit of evidence gathering before making policy changes.  I found first that too much time was spent "tidying".  Things I would have ignored (because I could not see them when I was out of the house) bothered me, so, for example, there was a lot of moving piles of laundry around the house instead of piling it all up in the airing cupboard out of sight and emptying it only when there was no room to stuff any more in.  There was also a certain amount of organising my time around the radio - oh, I'll just wait until the end of this programme - instead of getting on.  Listen Again has sorted that out.  I also registered with the telephone preference service to put a stop to the endless marketing calls I was getting from people who were just doing their job, but driving me nuts.

After these fairly simply changes, I had to face up too to a complete lapse of managerial competence. The mental list of things I did want to do was too long and in parallel with that, I underestimated the amount of time that stuff would take.  It's not as if I didn't know this already after years working, I just somehow imagined that because I had more time, time would actually last longer.  I had either forgotten how to prioritise or, perhaps more to the point, had no priorities because I thought I didn't want or need them any more.  This was meant to be a time when I could spend more time doing what I wanted, but instead was turning into a time when I didn't know what I wanted.  So I have reinstated a written to do list adopting the rules, especially rule 2, in this Oliver Burkeman article.  I am an avid reader of Mr B. His short articles must have saved me years of reading works on self improvement.  Heaven help me, I have even started writing shopping lists and adopting a haphazard kind of meal planning. (And thanks to Felix for such inspiring and entertaining posts on her own imaginative meal planning and productivity)

None of this means that I have become a super efficient automaton.  However, without replacing the structure of employment by a rigid timetable,  I now feel a little more in control of time.  I was interested in listening to Sarah Maitland tonight to hear her talk about living a patterned, rather than a disciplined (for her, spiritual) life.   I doubt it's what she had in mind, but cutting ruthlessly, snipping bits, a bit of ease here and there, going against the grain now and then, getting time to fit you where you can.  There might be something in it.
at 22:18 11 comments:

Email ThisBlogThis!Share to TwitterShare to FacebookShare to Pinterest
Labels: time 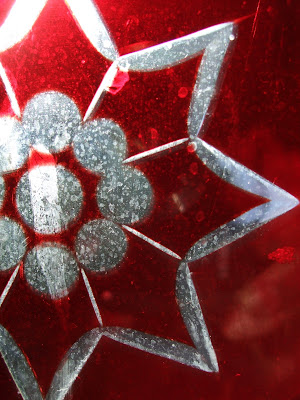 Who would have thought that spring would arrive so suddenly?  By Monday afternoon, the sun was trying to penetrate the dusty rain-spattered windows and after months of washing hanging up indoors it was warm enough for it to dry outside on the line.  But surely the biggest breakthrough has been that after years of being totally perplexed by the twists and turns of the crochet hook, I can actually crochet .  Through these cold winter months, I have spent hours secretly labouring away at my chain stitches and doubles and half trebles and trebles and, at last, the fog has cleared.


Sometimes I feel that I haven't laughed enough. This helps every time.
Have a good weekend.
at 11:45 4 comments:

Email ThisBlogThis!Share to TwitterShare to FacebookShare to Pinterest
Labels: knitting 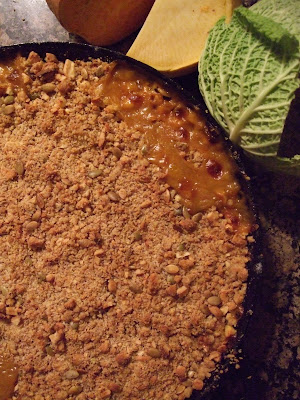 For me, root vegetables are the ultimate winter comfort foods and I have become slightly obsessed with eating them this last week which seems a little contrary given the sunshine we have been having.  I think it's the sense that soon  British grown parsnips or swedes will be gone from the marketplace, their disappearance a sign that winter really is over.   On the other hand, it could be just sheer cheapskateness as they are the original frugal food.

To start with, and having mentioned it a few weeks ago, I decided that we needed to eat a Cranks Vegetable Crumble, a lovely combination of nutty crunchiness and melting starchy sweetness.  I modified the recipe slightly, using small pumpkin seeds instead of sesame seeds, half a packet of cashews for the nut content, and feta instead of cheddar.  Then to use up my excess store of carrots, I followed up a couple of days later with this delicious spicy carrot soup on Sunday - colourful, fragrant and better than anything from the supermarket.

To finish off our root-based starchfest, I made our favourite Onion, Bacon and Potato Hotpot from the Pauper's Cookbook, the dish I might nominate as my last meal if push comes  to shove.  There are lots of faithfully reproduced versions of this recipe, and this quick version by fellow fan Joanna on her food blog for those pressed for time.   Here is the longer cooking version, imperial as ever...

Pauper's Cookbook Onion Bacon and Potato Hotpot
4 large onions, 4 large potatoes, quarter to half a pound of bacon rashers. For the white sauce - 2 oz flour, 2 oz butter (or substitute), a dash of nutmeg and other seasoning to taste


Make up the white sauce in the usual way.  Peel and slice the onions and potatoes quite thinly.  Remove the rind and cut the bacon into thinnish strips.  Fill a greased casserole dish with alternate layers of sliced onions, sliced potatoes and bacon strips, ending with potatoes.  Then pour the sauce over the vegetables, give it all a good shake to distribute throughout.  Cover and bake in a fairly hot over (Gas 6, 400F, 200C)  for the first hour, then uncover and lower the heat (Gas 4, 325F, 180C).  This gives it a lovely crispy top. 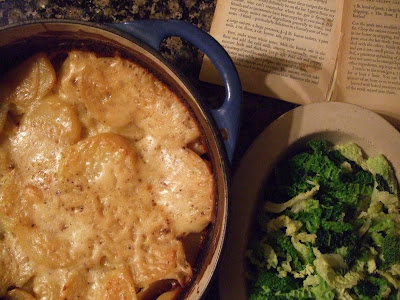 Perhaps my overbuying of seed potatoes is not such a bad thing after all.
at 12:04 10 comments: 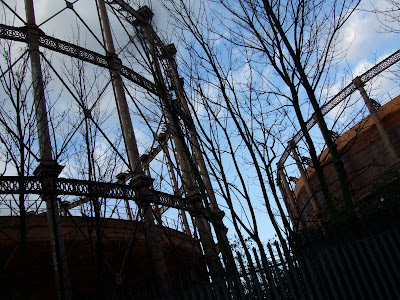 In the balmy days of October last year, I had to run an errand to Canning Town and rode down the romantically named Twelvetrees Crescent which crosses over the River Lea in Bromley-by-Bow.   It is, for the most part, a modern industrial estate but there are the looming remains of Victorian gas towers, a neglected planting of trees and, intriguingly, a dead end with a set of locked gates .  I found out later that this was probably the home of the now defunct London Gas Museum (There is, you'll be pleased to hear, a National Gas Museum elsewhere).  I went back last week hoping to find the old building, or at least a cache of spring flowers among the trees. No success on either score.  It turned out that the little wood was overgrown and littered with discarded cans.  There was a clearing on the edge with a memorial to the men of the Gas Light and Coke Company who had died during the Great War. 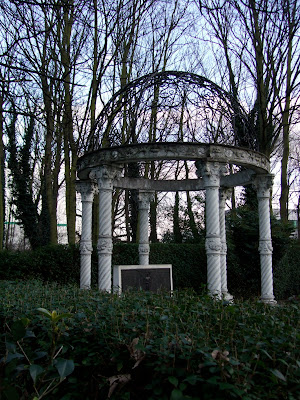 And, quite touchingly, a gas lit lamp burning high up  surrounded by the overgrown trees. 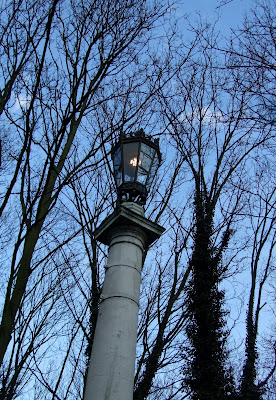 I cycled home in the coolth along the canal to Fish Island hoping to find a bit of nature.  Some birds were flitting around in the ivy, a few water birds fussed around and a cormorant flew low over the water.  Then around the bend, the Olympic Stadium lorded it and it was time to turn off and head back home.
at 00:43 3 comments: 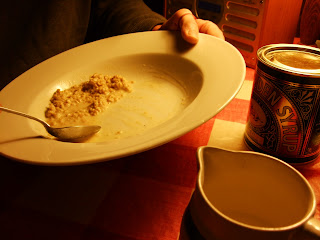 So we were sitting and having our porridge last Monday morning, as we do nearly every day, all seasons, and I said how wonderful it was that the mornings were brighter and at last the sun was shining. And he, and this has never happened before at breakfast, or any other mealtime as far as I can recall, actually launched into a Philip Larkin poem.  Coming.
On longer evenings,
Light, shill and yellow,
Bathes the serene
Foreheads of houses.
A thrush sings,
Laurel-surrounded
In the deep bare garden,
Its fresh-peeled voice
Astonishing the brickwork.
It will be spring soon,
It will be spring soon -
And I, whose childhood
Is a forgotten boredom,
Feel like a child
Who comes on a scene
Of adult reconciling,
And can understand nothing
But the unusual laughter,
And starts to be happy.
And that was a start of a week of comings and goings.