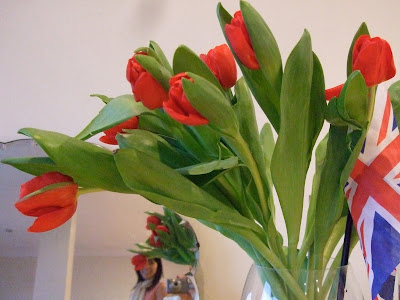 My friend became a British Citizen yesterday and invited three of us along to the ceremony at the old Bromley-by-Bow Town Hall.  I've never been to one before and was surprised at how friendly it all was.  Cups of tea and biscuits for everyone, the Mayor coming round to say hello, lots of snapping and smiling. Dress was supposed to be smart casual but some people had dressed up for the occasion - my stylish friend in her 60s lacy, peach-coloured frock, and some Bangladeshi women looking ravishing  in richly decorated saris.  The Mayor made a lovely, thankfully short, speech about Tower Hamlet's long history of immigration, the importance of knowing your neighbour and how everyone had the opportunity to become fully involved in their local communities. After the oath taking, each person got a certificate, a round of applause and a photo opportunity before we finished off with a couple of rousing verses of the National Anthem before going back out into a traditional heavy downpour of sleety rain. It was all very jolly and also rather touching.

I'm not sure what the precedents are for citizenship gifts, but I thought some lucky red tulips, some special tea and cake would be "suitable" (as B.Pym might say).  The label on the tea, some fine Oolong, suggested it's scent would suggest narcissus and hyacinth, so with the poppyseed cake and the passion cake it turned out to be a rather fragrant tea-time.  All of which set some people up very nicely for that other great tradition, a night in the pub. 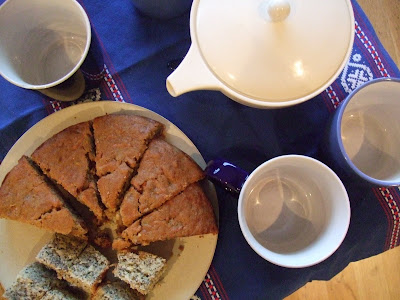 If you are interested in the recipe for the Passion Cake, here it is.  I found it in my recipe scrap book but had not noted down where it came from.  Essentially it's a version of carrot cake with a twist -  it includes mashed potato.  I used unseasoned leftovers and substituted margarine for the butter - all very frugal, which seemed rather fitting for the British theme of the celebration.  It made a lovely moist, nutty cake, but I thought it could have done with a bit more spice, a good pinch of nutmeg, or maybe black pepper.  As you can see, I'm still using (ahem) Imperial Measures.  Click on the pic for enlargement. 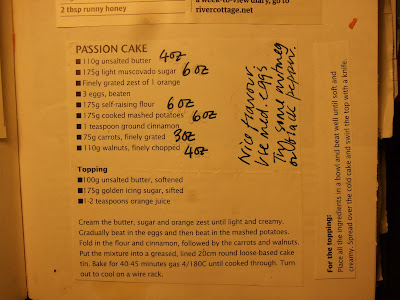 mashed potato? in a cake?! I have got to try that!

Sounds like a great day all round. I've never thought about the actual ceremony, and I'm glad that there actually is one! The sleet isn't very welcoming though...

Congratulations to your friend. I've stuck with Imperial measurements, too, (I have my dad's old shop scales in the kitchen) and convert everything. But we're in good company - apparently, so does NASA.