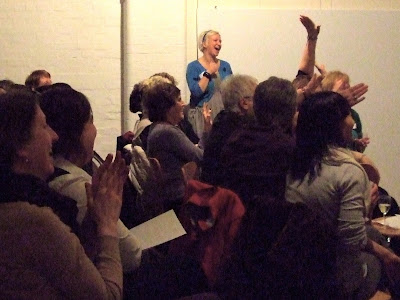 I love this photo. It may not be the most technically competent snap, but it captures a moment of sheer exuberant pleasure at the end of a singing workshop we had last night at our East End WI meeting. I don't recall any other event when I have seen so many of us smiling so widely.
It's not unusual for me to come home full of joy after one of our get-togethers. The tippling helps, of course, as does zipping home on the bike. It is, though, the sheer pleasure of meeting and mixing with a range of different women, mostly very local, but some travelling from further afield. I'd be the first to admit that it might not be to everyone's taste - one friend described it as a bit like brownies for grown-ups, another said she found it all a bit too worthy for her. It's probably also true that the personality of the branch, what you want to get out of it, and what you want to give back can change over time. But I would not have guessed a couple of years ago that through EEWI I'd be devising a dance performance with my mates and performing in public; chatting over supper with an elderly lady who'd been a Wren in the Forties; picnicking in the dark for Earth Hour; being counselled by wiser women; selling the joys of sowing and growing; making cakes by the hundred; making my own homeopathy remedies; designing a bee apron; sewing morsbags for England (or so it seemed); working with gifted women who aren't motivated by what's in it for them.
A few of us have been making jam for Imperial War Museum recently (described here and here). One of our group described her pleasure at one of the sessions at sharing something new as well as small chat about life in general, feeling part of a community and the sense of history and wondering whether this was how it used to be when the recipes were first used. Which just about sums it up beautifully for me.
And the singing.
at 08:59

I thought you might like to hear about Colouricious, a production company in England dedicated to spreading the love of textiles and inspiring creativity across the world media.

All the content is an ideal resource for teachers and textiles students.

Check out the programmes on:-

It sounds lovely (and good fun)

I just checked in after also checking this morning...3 new posts have appeared now. Has anyone else had this happen?
I'm always jealous of your go-getting branch of the WI.

I loved Brownies, so it all sounds very appealing to me! Why don't we have something like this in Teddington? And the group blog is fabulous too!

I've just joined the Borough branch and am very glad I did, I love the history of it and the philosophy behind it and it makes me really happy that there are so many people now all over London (and the rest of the UK too, I hope, but I haven't really looked into that) who are interested in carrying it on. I too agree with your friend's summary about what is so appealing about it.