passing the time of day 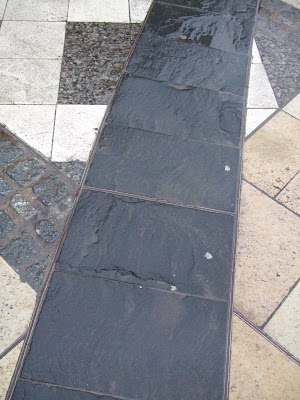 One of the things I am enjoying about not being gainfully employed is the freedom to do things at times of the day when I would once have been confined inside. Last Friday, for example, I went with some friends to the Matthew Smith exhibition at the Guildhall Gallery behind Cheapside and had the time and space to enjoy the boldness of his paintings without having to rush off somewhere else. In fact, the whole of the gallery is locked into a time capsule of gentle consideration - the guard on the door actually remembered me from a visit I made back in October. Way below in the depths of the art gallery are the preserved remains of London's Roman Amphitheatre; and out in the square you can trace its arc in the paving tiles.
On the other side of the square, inside the Guildhall Library building, is the curious little Clockmaker's Museum. It charts the history of clockmaking in the city, describes how prominent London was, led by the Guild, and the achievements of all the men involved. Yet even though the achievements of these clockmakers were impressive and influential, I could not get too excited about the clocks and watches on display, their showiness. I am not a lover of watches. A couple of things caught my imagination - an old sun dial, a little frame of watch hands, delicately arranged; some "toy" watches; and some of the intricate and beautiful springs and balances. And the sound of the carriage clocks clustered at one end of the room, tocking discreetly, slightly out of time with each other. (They were most definitely tocking and not ticking.)

On the way out, I noticed that the museum is occasionally closed to allow for rewinding. Which is, I think, what I've doing for the past few months, though not entirely without glitches.
I'll come back to that later.
Entry to the art gallery is free on Fridays. Entry to the Clockmaker's Museum is free.
at 23:50

Memories of winding clocks and beautiful clock keys in their little hiding place. I had forgotten about winding all the house clocks.

I always appreciate the links in your posts.

I think of watches, much as Adam Smith did, as the consumer gadgets (ipods, perhaps) of the eighteenth century.

"How many people ruin themselves by laying out money on such trinkets of frivolous utility? What pleases these lovers of toys is not so much the utility as the aptness of the machines which are fitted to promote it. All their pockets are stuffed with little conveniences. They contrive new pockets, unknown in the clothes of other people, in order to carry a greater number. They walk about loaded with a multitude of baubles . . . " (from the Theory of Moral Sentiments (1764)

Kate - Adam Smith - and you - are spot on. When you see the watches en masse with their, to my eyes, overworked decorativeness, they seem so very much to be unnecessary baubles. There is something very suggestive of city boys about them.

Ah the joy of finding a new rhythm to one's days . . . I didn't know about the Clockmakers' Museum but as many of my 18th century Gaunt ancestors were London watchmakers, I think perhaps I should pay a visit the next time I'm in the metropolis. Thank you for the pointer, Colleen.