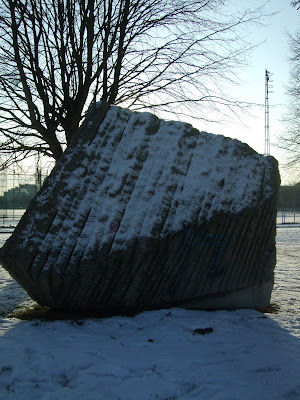 erratic: having no fixed course;transported from an original resting place, especially by a glacier; characterized by a lack of consistency, regularity or uniformity; deviating from what is ordinary or standard. ( Merriam-Webster Online Dictionary)
I was completely captivated as a sixth-former by the poetry of glaciation - drumlins, eskers, terminal moraines, corries and arretes, erratics. I can't tell you how excited I was when, cycling around Ireland many years ago I suddenly realised that I was surrounded by basket-of-egg drumlins; how much I wanted the unexpected hilly parts of Norfolk to be terminal moraines; coming across perfectly round lakes on field trips. The power of glaciers to scour and shape.
I'm not sure that I've ever seen a natural erratic, those rocks that have been transported from their original locations by glaciers and dumped miles from their natural landscape. You do come across faux-erratics every now and then. When I was a child, we used to play on a giant rock of chalk left on the grass outside a block of flats. It was still there the last time I looked, diminished in size either by the attrition of children's scuffing or me being twice the size I was, or both. There's another art-work erratic in the middle of Hackney Marshes- you can see it from the A102. (I was pleased to see that it was featured in the Museum of Childhood's brilliant little exhibition, Kingsmead Eyes. This link takes you to a short video of some of the work - I love it.
I don't remember having seen before the erratic I photographed here. It's probably been there for ages, but because I took a different route across Mile End Park in the snow last week, I stumbled across it. Now the snow has gone, it might even look like a glacier left it there.
Hope to stop posting so erratically soon, though there is a lot to be said for having no fixed course and deviating from the ordinary.
at 22:35

Well, sure, a lot to be said for it, but not when I am missing your posts. Just sayin'. ;)

And your posts are never ordinary...

I still remember the picture of a glacier in my third grade geography book and the feeling of amazement at the world and awe at the thought of such a great thing as a giant river of ice.

Here in town there are some very erratic stones. They were put there as a feature but look as if they've dropped from space. They've never been popular, I'll try to remember to take a picture for you. They are the most unnatural natural feature you could imagine...

You are absolutely right about the language of glaciation, C, and this must be the most fascinating post I've read in 2010. You've set me off on one of those random linguistic voyages of discovery. So thank you for that!

Your post has reminded me that I was kicked off my Geology A level course. Although I'd agree the language is poetic, it always felt like I'd signed up for Hungarian. (In case you're wondering, I switched to Economics).