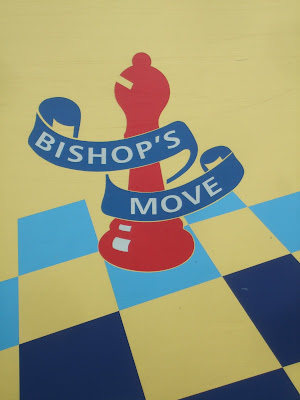 I've mentioned before that we are awash with Bishops where I live - well, two actually. One of them moved yesterday and this was the removals company he chose. It made me laugh.
Later I read in the paper a summary of how people spend Christmas day. It think it went something like this: the first argument happens quite early, followed by the first drink. Board games appear late in the afternoon. We don't engage in anything as cerebral as chess, which probably does not count as a board game anyway. Sometimes we manage a hectic game of Taboo. And my brother and I have a Scrabble play off.
I lost my crown to him last year.
( I should have added that it was only a paper crown.)
at 13:34

I like the idea of being awash with two Bishops. I suppose it does mean they could manage a tide.

Lucy - I think the collective noun for bishops is a "sea". Perhaps a play on "see"?