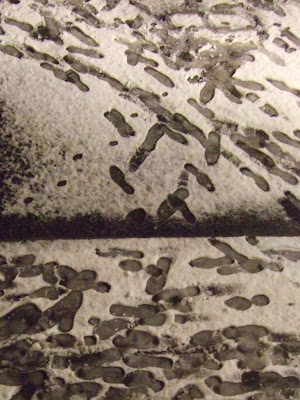 Late yesterday afternoon, while we were in here playing with trees and greenery, it started to snow. It had been raining earlier and, as the temperature dropped, big flakes started to fall and settle. It's quite hypnotic watching snow fall, the light changing gradually and the sounds becoming muffled as it thickens. Snow - just what I wanted to put behind the door of the advent calendar.
I looked out of the upstairs window before I went to bed. Because the snowfall had been fairly short lived - no more than an hour maybe - we only had about an inch of snow, possibly less. Outside the house, the snow had already been criss-crossed by busy foot prints, people coming home from work, taking a short cut from the Tube station, hurrying to get somewhere quickly.
Only to be expected really, for this isn't any old snow. It's London snow, in such a rush that today all that's left is slushy roads, perilously icy pavements and a mere dusting of white in the park.
at 23:53

We had only a dusting here, too, now turning to slush. Very envious of my mum who has 60 cm! K x

Bitterly cold here, with about 8'' of snow. Looks lovely and gets rid of the gloom. i also love watching it fall, especially as it falls in front of streetlighting at night.

Here in the north east we've had about 6 inches of snow. Makes even the grotty parts of town look pretty. Well, almost.

It's raining here, so our white blanket's disappearing fast :(

Have a wonderful Christmas and a peaceful New Year - I've been enjoying your advent calendar immensely :)

If you look carefully, you can see the pawprints of a fox, cutting across from teh edge of the pavement on the left hand side at a 45 degree angle.

We were sitting in here on Christmas day. late afternoon, and there he was, mooching round outside our front door, sniffing for leftovers no dount.