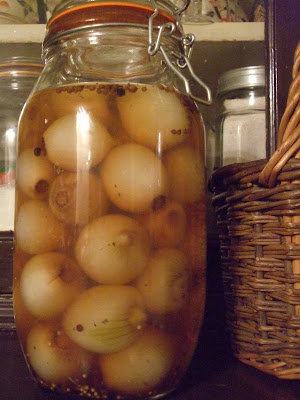 There is no middle way with pickles, so you may want to skip this page which I am dedicating to my brother. I've never pickled onions before but when I saw them for sale at 3lb a £1 at Globe Town Market I was tempted. Then I got talking to Jenny the Cook in the queue and she gave me a recipe which involved brining and sweetening and storing. I was hooked.
This is all good practice for some new year jam making and preserving I'll be doing with the East End WI for the Imperial War Museum as part of their Ministry of Food exhibition which opens in February 2010.
By the way, the dedication has to do with my brother's addiction when he was a toddler, so much so that he learnt to open the fridge and steal pickles. It took a while for my mum to cotton on, which does not say much for her sense of smell. Even now I bet he'd like some in his Christmas stocking. His daughter does not appear to have inherited his tastes. She looked at the onions and wanted to know why we had eyes in a big jar. Mmm.
at 11:57

I've always wanted to make jams and pickles! Perhaps my resolution for the New Year? Will you be doing a demonstration at the museum? If so, I'd love to come.

And if only I'd known you were at John Lewis Kingston--only 10 minutes walk from our flat!

I share your brother's taste in food. I went ski-ing with the school to Italy in 1978, the food in the hotel was absolutely terrible. I went to a local shop and bought several jars of pickled onions. I took them down to each meal, including breakfast. I wonder why people think the English are eccentric? (I love making them as well.)

Kristina - I do hope we won't be expected to demos, though we will be documenting the process. I'll post a link to anything here.

I loved eating pickled onions when I was a kid. Until my gran told me consuming all that vinegar would dry my blood.

Mmm, pickles! I do love pickled onions although they tend to make me gasp and have to catch at my breath for a few minutes, I don't know why. The only thing I don't like pickled is beetroot, although maybe that's because I have only ever tried shop-bought pickled beetroot.