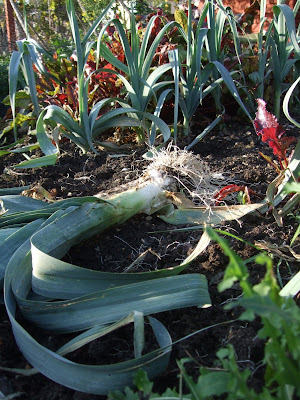 One of the best things about autumn is the abundance of vegetables. We are still eating self-sown rocket and mizuna from the plot, and a smattering of container grown red oak leaf from the back garden. Added to these there are the pleasures of more substantial roots and leaves - beetroot, chard, potatoes, leeks.
We dug up our first leeks this weekend to make a smooth and comforting leek and potato soup, pleased that, despite a nasty attack of voracious leek moths, at least some leeks have survived. I need to do something about those moths next year - last year we lost the whole crop. Pheromone traps, perhaps (any advice gratefully received).
I guess it's just as well that we have survived ourselves. We had a note from the Contaminated Land Officer this week to tell us that the historical use of the allotments was for dock dredgings, which pretty much explains why the so-called soil is so awful. As a ship's rigger's driver's daughter, I rather like the idea of gardening on dock dirt. However, according to the venerable CLO, the soil samples indicate "small numbers of contaminants thought to pose low level risk". Her advice is that we should scrub veg before eating, keep children away from playing with the soil, wear gloves, rinse tools, try and cut down on the amount of soil and dust brought into the house from the allotments.
I'll try my best. I can guarantee the first "to do" on her list: enjoy the allotments. Caution thrown to the wind or otherwise.
at 22:32

Now they tell you...

Did anybody tell the goats?

Good grief. But everything on her list sounds like something we do anyway. After all, who really wants to bring soil and dust into the house?! K x

Oops. Never thought about the goats!

Your leeks look great, but there's something about the phrase 'dock dredgings' that sounds a little... ewww!