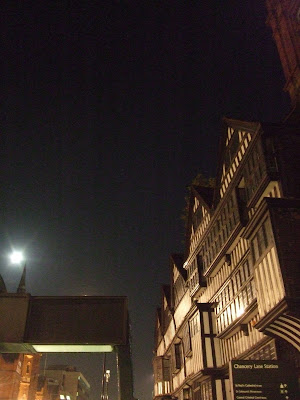 I foolishly chose to go shopping in Oxford Street on the day that the Christmas lights were switched on. That meant that the tube station was closed and I had to walk to the next one. But that was so crowded that I decided to walk on to Holborn. Then Chancery Lane. And when I had got that far, I was in the swing of the walk and thought I might as well carry on because it was such a lovely evening, cool rather than balmy, with a full moon and, of course, all lit up. Along High Holborn, past St Andrew Holborn and Old Bailey, and over the viaduct. 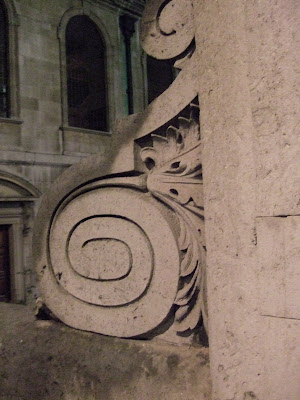 The first glimpse of St Paul's appeared at the end of an alley. 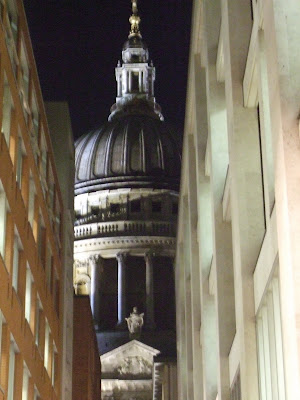 Then into Cheapside, past St Vedast, Foster Lane with its list of old churches incorporated into the parish, and St Mary le Bow. 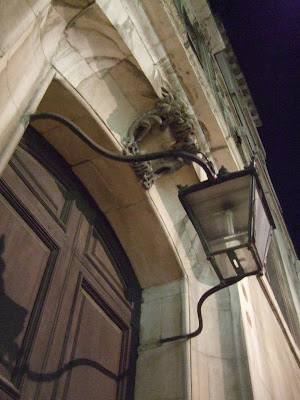 The city is quieter at this time of night, less traffic, people standing outside pubs or making their way home, then an entrance to the tube on the corner of that other city temple (this link gives an interesting explanation of the name of the street, not for the faint hearted.) 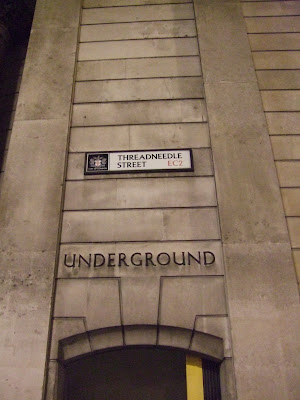 At which point I disappeared underground to get home a little more quickly.
Fireworks tonight
Added later: If you have never seen skylanterns floating away in the wind - which tonight was off towards the low-in-the-sky moon in the east - then try them sometime. Absolutely magical.
at 17:43

Agree with you re Skylanterns - how long do you think it'll be before they get banned though?

There's nothing like an impromptu walk to lift the spirits - and I am just as enamoured of impromptu urban walks as rural ones!

St Paul's looks beautiful. So many people never look up when out walking-they miss so much.

If I was to walk home from a day's shopping I wouldn't pass anything as interesting (even the names in your post are so evocative). Unless you count the park which used to be the home of one of the founders of the local iron industry. But then the council made the decision in the 70's to demolish the magnificent building that had been his house. Ah well, at least they left the stable block.

How lovely getting this glimpse of the city at night. Thanks for sharing.

a review in today's new york times says nokes' new bio of samuel johnson among other things makes the most of his being a londoner. this post reminded me of that and ....i think this view of st paul's features in one of the BBC adaptations of....oliver twist?
beautiful to think of your rambling. another great book about women rambling london is streetwalking by deborah parsons.

Purejuice - Thanks for the info on the Johnson bio and the walking book. I had not realised until I was told that Johnson used to live in these buildings, with which we are all familiar here from their appearance on old tobacco tins, and commonly found now in sheds and cellars filed with rusting nails.

Very evocative views ..it seems a long time since I climbed the stairs in St Paul's ...thanks for sharing