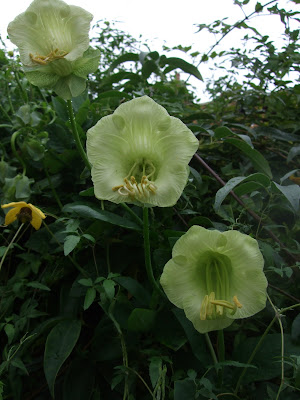 It has been unseasonably mild in London for the past few weeks. Only a couple of days ago I saw these climbing over the wall of a garden facing onto Mile End Road. Yesterday I saw acanthus flowering in garden facing onto the Thames. And today John brought home the last of the hollyhocks from one of his gardens. Rather unsettling for late November.
Meanwhile, in our own backyard, there was a bit of a bee thing going on ... 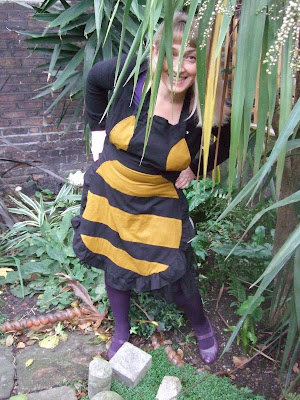 I made it for the East End WI bee-themed AGM last week (possibly an indication of a woman with too much time on her hands). Now, my preference in aprons is normally inclined towards the Quaker end of the market, plain and workaday. However, once I embarked on this apron, it began to develop a life of its own. Working without a pattern, I found that the head of the bee was a little too large and floppy. The addition of some interfacing and darts had the effect of adding a corsetry effect that one of my friends described as somewhat burlesque. And the bee-eyes seemed to develop that weird hypnotic trick of following you around, all seeing, all knowing.
I hear the weather is going to chill down a bit, which is probably just as well.
at 11:53

What a super apron! Did everyone wear bee-themed attire to the meeting? That would be fabby! K x

I don't think that there would be any hiding in the shrubbery with that apron. Very impressed!

Am alarmed at thought of plummeting temperatures; here on the Devon-Somerset border, we are totally waterlogged - now into fourth consecutive week of heavy rain and another five days of it forecast. If there's even the merest hint of a freeze, things could get seriously scary . . .

It's mild here too - I've had a fresh rose bloom unfurl this week :)

What's all this I hear about soil testing going on at Mudchute allotments?

Kristina - Only a few of the more extrovert members went in bee attire. Will be posting to EEWI website.

VP - the soil saga is ongoing and under discussion so don't want to set hares running. Will let you know the outcome!

I popped in here to read for a quick minute yesterday ...while waking this morning the memory of you in a bee suit came to mind, and in my hazy, waking fog, I thought,"What a strange dream". It wasn't until driving home this afternoon that I remembered my waking-up thoughts, and then this post. I think it's hiding behind the leaves that gives it the dreamy, surreal, Ballet Russes quality...

I guess I did imagine the antennae, though.

Love the apron! And I love the ever-so-slightly strange circumstances for its conception!