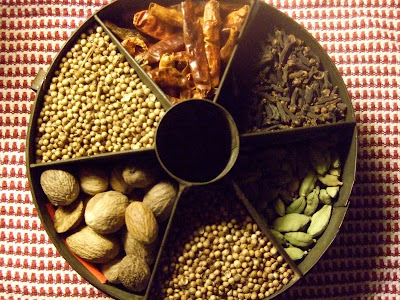 Tempting though it is to keep the remnants of last year's spices, if you want your cakes and puddings to excel, you have to sacrifice parsimony and refresh the spice box. So I checked the necessary ingredients, made my list, and visited a cash and carry under the railway arches to stock up. These modern fluorescent emporia are stacked high with variously sized packs and sacks of rice, pulses, nuts and spices, . You have to weave your way through aisles of unfamiliar labels (I should have been asking for jaipal instead of nutmeg) and be very disciplined not to leave with giant packs of exotic ingredients. 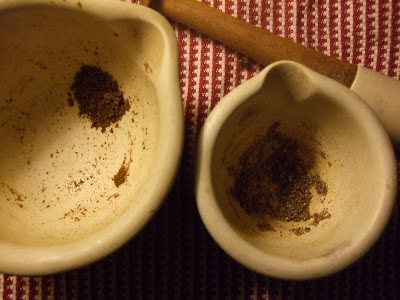 Back home we set to pounding cloves and cardamom for the pudding, surely one of the most physically satisfying and sensuously fulfilling of jobs. Even my boy remarked on the scent of oranges and spices filling the house. Unfortunately he was unable to throw any light on the whereabouts of the brandy we bought for steeping the fruit. 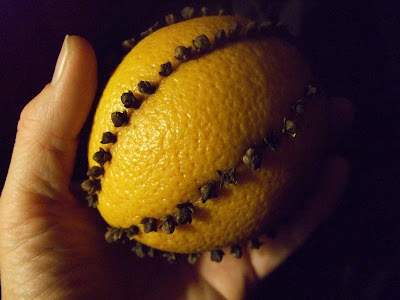 The remains of the cloves were stuck into an orange, insufficient for a full pomander, but enough for me to sit here and hold it close enough to smell winter indoors while I listen to the rolling boil of the pudding being steamed. More of which later.
at 11:56

I shall have to follow the lead of your previous post - better late. Having missed stir-up-Sunday, I'll have to go shopping tomorrow and make the cake and puds this weekend

I can almost smell those spices! Hate to admit it but I've resorted to buying a pud (like last year).

Ah. nothing so fine as a home made pud.

Oh I can practically smell all those lovely spices from here! And I just arrived home and opened the apple book last night--thank you so, so much! K x

Although being back in deepest Devon has much to recommend it, I miss having easy access to anything other than the most commonly used spices. Not for Christmas cake or pudding (no-one in this family eats them) but for Indian and Middle Eastern cooking. There's not much call for the likes of sumac or asafoetida, for example, in this area so I have to buy online - but it's not the same. All the spices I bought in Cochin a couple of years ago have, of course, now gone past their use-by date. Sad but true.

I am a self confessed sell-by-date-slob (and also hate throwing anything away!), although I know you are right when it comes to spices. I try to get round this by keeping whole spices that I grind just before using them, I tell myself that this is ok. I have been caught out before by dried yeast and bicarb of soda, the effects of them being past their best are undeniable!