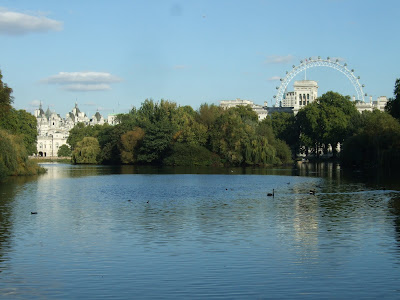 The last 10 days have been strange, getting used to a new rhythm to life, exploring what exactly it is that I want to explore. The lack of a familiar structure to my day has been difficult to deal with. It reminded me of those first months of being at home with a new baby when I didn't seem to be able to get out of the house before midday. At least I had an excuse back then. Now I feel like there is some spell on me, distracted by the washing-up and dust, and somehow unable to get the better of it all. Yet.
That's not to say that there have not been some interesting moments. I spent a substantial amount of the first week in A&E and the fracture clinic keeping young John company while he waited to have his broken wrist fixed. While we were waiting, an elderly couple came in, the woman nursing her arm in a sling and her husband solicitously trying to make her comfortable. It was not another broken arm though. John overheard her telling the nurse what had happened. " I had a Mars bar and though he might like a little bit. The squirrel. But he wanted the lot and bit me. Now I'm going to have a rabies shot and god knows what. I don't know what I was thinking of - I mean he hadn't come out of Bambi, had he. It's not bloody Disneyland." 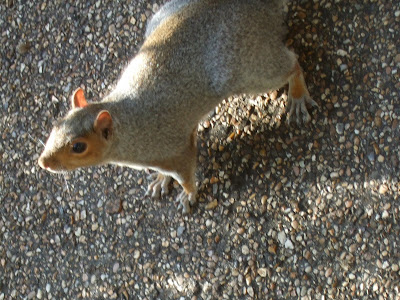 I thought of this when I was in St James Park on Thursday,. Walking around the lake, I came across a stunning view that somehow looked more like a European city than London. A tourist asked me to take a photo of him against the backdrop. We chatted briefly and I asked him which was his favourite park - "Oh, this one. Look at the view. It's like Disneyland." But when I saw a woman feeding the squirrels, one running along her arm to get at the nuts she was holding, I remembered the old lady and I wanted to remind her that it wasn't Disneyland after all.
If only it was. I seem to remember that the squirrels in Bambi were pretty good at washing up, weren't they?
at 12:44

Silly me. Why would they be washing up in Bambi? Maybe it was Snow White.

haha! Funny, I was just reading a description of a local rental cabin here in our mountain area. The owner stated "the sqirrels and raccoons are so friendly, you can feed them right out of your hand". What was this woman thinking!? I wonder how many visits our local emergency room has had since this advertisement went up, haha! Cute post :)

We are always warned, round here, that if we see an injured badger we should not try to pick it up. They look cute but have a nasty bite.
Disneyfication of wild animals has a lot to answer for! (Though there are other literary culprits as well.)

You'll get into a new routine soon, and I'm sure it will be far more interesting than the usual workday one...

And very intrigued by the rosehip itching powder! Just annoyed with myself for hitting the wrong key while editing and deleting all the comments. Sheesh!