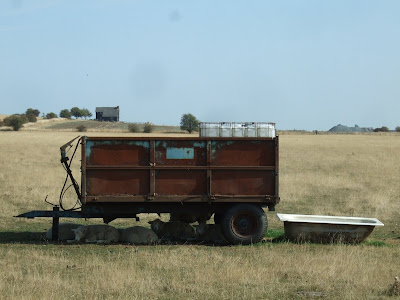 It was only three weeks ago that we visited the Isle of Sheppey on one of those days that were hot in the sun and cool in the shade, the first early days of autumn. In my quest to visit the eastern isles (forgive me Messrs Johnson and Boswell), I could not miss out Sheppey, site of chalet holidays with kind aunties when I was a child, an island where you get three isles for the price of one courtesy of the marshy creeks, the Saxon island of sheep.
You reach the Isle of Harty at the south of Sheppey via a long, worn out road across the flat sheep filled fields. There must have been a ferry at one point across the estuary to Faversham or Whitstable, now at the end of the road only the Ferry Inn remains. 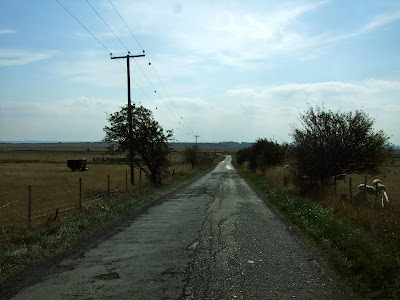 We wanted to walk across to the sea wall north of Shellness and went via footpaths that occasionally disappeared. We didn't know quite what to expect - the best part of any new walk when you come across surprising places and spaces that didn't quite look so good on the map. In the small trees at the corners where the footpaths crossed from one field to another there were wild plums to eat and steal (and bring home to make two pans of jam).
There were a few houses along the way, some abandoned, and a sense of being well off the beaten track. 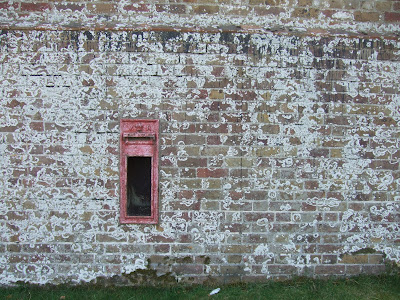 We passed a tiny church, St Thomas the Apostle, still filled with flowers (a recent harvest festival perhaps) and decorated with the prettiest stained glass celebrating the local countryside. Jars of jam and pickles were for sale, pencils and small cookery books. 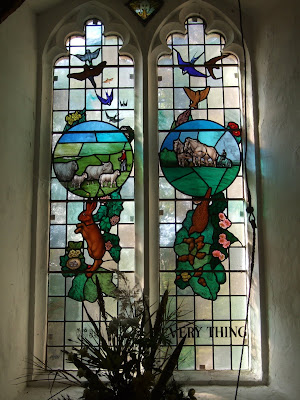 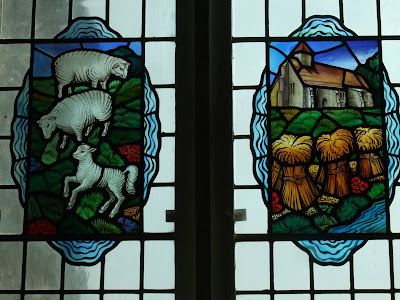 Walking on across the marshes, we could see the white cockleshell beach of Shellness distance. It was really noticeable that the sounds were different here - the rustling of a row of poplars, and the reeds, and birds in the distance. The path seemed to twist and turn so that you thought you were close one minute and further away a bit later on. I pretended I was in a foreign country. 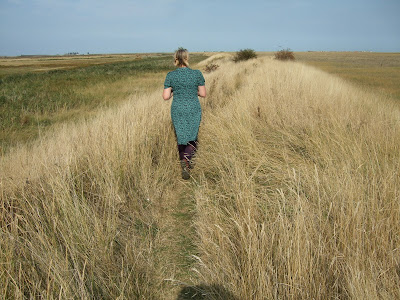 At the end of the path we turned north, modestly passing the nudist beach, and on to tea at a friend's place before we made out way back round on a different path before the light went.
If you are wondering what the apple connection is, this is it. 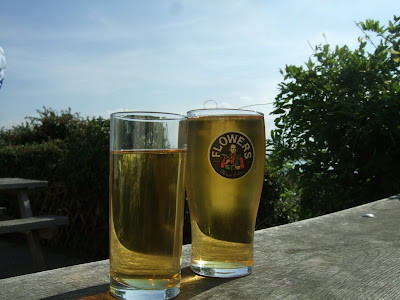 The Ferry Inn serves cider from the Isle of Sheppey and we had a couple of pints. Very fine it was too. I forgot to ask where it came from - there was not much evidence of apple orchards around. I found a Sheppey based cider maker, Paul Johnson, in this list of Kentish cider makers and that may be the source. I'm thinking now that I may have to go back to check in person.
at 22:44

Nudist beach? It shows real commitment to the cause if they were out and about in the altogether at this time of year.
Looks like a good day out.

We have walked on the other side of the water on a footpath from Faversham, and I remember seeing a board which mentioned the former ferry to the Isle of Harty. I thought at the time that it looked like a rather pleasant corner of the island.

Where's the crazy golf? The working men's clubs? The slot machines? The evangelicals who ran beach missions every summer and fed us strictly rationed hot dogs while we watched imaginary firework displays? The parade of cars and taxis on to the island on a Friday evening as dads came to join families on holiday in Sheppey? (Many men having lost jobs in the docks went on to 'do the knowledge'.) It always amazes me that there is more to Sheppey than Leysdown where I spent every summer weekend and school holidays up until the age of sixteen. Its a place I associate with riding my chopper and cockling and Sunday mass in club rooms. Went back a few years ago and was amazed to see that what I recalled as a cliff we regularly climbed was in fact a very gentle hill. Must go back.

Sounds (and looks) a wonderful walk.

I love cider, and I love fall.

Oh, Joan, I remember all of that, except in my time the dockers still had jobs. My more refined friend - she was only allowed to watch the BBC - went to Minster rather than Leysdown. We used to go to a giant hut for lunch ( or dinner as it would have been then). The food was execrable, always meat and gravy and potatoes. Harty would have been only a couple of miles or so away and I didn't even know it existed.

How I love this post and all its sounds and atmospheric descriptions! My own memories of Sheppey are somewhat tainted by the circumstances under which I visited. About 13 years ago I decided I wished to go camping. However I had no money for train fare etc. so I decided to cycle from Croydon to Sheppey, throughout the night, to stay there. I had done no training whatsoever for such a feat and awoke with such terrible muscular pains that I had to telephone my mother and ask that she collect me and the foolish man that I had convinced to accompany me on this escapade.

We did see a weasel and the cycle through the night was very exciting, however I feel, after reading your post, that we missed much about this place.

I especially enjoyed your sonic descriptions of Sheppey - and, of course, the cider.

The stained-glass windows alone make me wish to return to Sheppey and to revel in the loveliness of the place that you have captured here.

a beautiful walk it sounds, with the wonderful description of the little church, its flowers, glass, pickles....your own plum windfall. how very nice.

@colleen - hehe, I thought I was the only kid whose parents disapproved of ITV!

I didn't realise till I grew up that I have a whole chunk of cultural references missing from my childhood - the Muppet Show, the A-team, etc etc! Although it doesn't seem to have done me much harm....