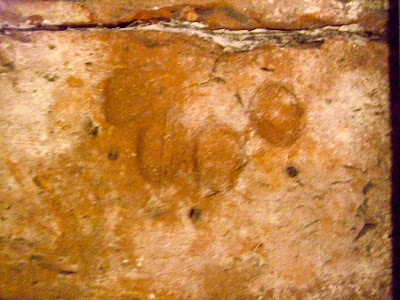 A little while ago, pre Booker frenzy, I read a piece by Hilary Mantel in the Guardian about how novelists unlock the emotion embedded in the past, in this particular case triggered by the traces found in the bricks of the house where Ralph Sadler lived. It's worth reading the full article because she writes so well about what it is like to be a novelist, but if you haven't the time, this is what she said about the bricks and what they held:
"But down in the cellar are the real traces of the past, like the building's flesh and blood: Tudor bricks, small rosy bricks, made right on the building site from the earth near Hackney Brook. This is Ralph's house in process, in the spring of 1535, when the soft bricks were tipped from their wooden moulds on to straw and left to dry before firing in a kiln. The workmen have marked some bricks with an X, to show that they are the 10th, or maybe the 100th. There are other marks, dots and whorls; they could be crude signatures, or good luck charms. In one of the bricks a blade of grass, blown on a spring breeze, is caught in outline like a fossil. Another brick, still wet, was trampled on by a dog."
I rode over to Sadler's house - Bryk Place as it was then, now Sutton House - to see them myself. Maybe those telltale bricks were there last time I visited. If they were I didn't notice them because I was too taken with the linenfold panelling at the time. Although I cannot claim to have felt the same depth of emotion as Ms Mantel, there was certainly something moving about the marks on the bricks and the notion that they were made locally. But somehow, what I find it easiest to see in my mind's eye is the lolloping, grinning dog, joining in, making a nuisance of itself walking in the wet clay, and a hard done by workman cursing it to high heaven. And that rather tickles me.
at 20:37

There's a dog print in some concrete in a corner of our kitchen where a wall was moved long ago. Someone has put the date next to it and it's very poignant. A very accessible piece of history.

She is such a terrific writer, isn't she? (Love that phrase "pearls still warm on the neck of Anne Boleyn".) Now that you've seen the house, you just have to read Wolf Hall - if you haven't already done so. It's brilliant (although not quite as brilliant, perhaps, as A Place of Greater Safety, which had me walking round Paris tracing the revolutionary footsteps of Danton, Desmoulins and Robespierre).