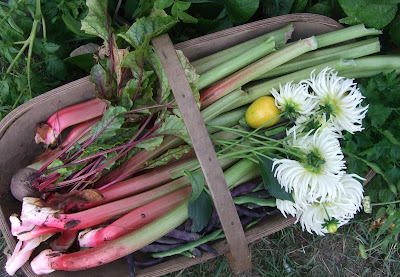 Emily has a surfeit of rhubarb and gave us a coshel when we were at the allotment the other day. She has had a plot since 2006 and decided that as soon as she could she would not buy any more vegetables, just use what she grew. She has been self sufficient since last year. She is also a whizz at knowing how to preserve her veg to see her through the winter. Now I have a bit of an aversion to freezers but Emily's enthusiasm and my loathing of waste has persuaded me to give it a try. So we sat chopping and sugaring last night for the freezer. I've also made rhubarb and apple crumble, with spoonfuls stolen at dawn when I was too hot to sleep. And a rhubarb upside down cake is planned too.

We will still have enough left for jam. We both have fond memories of a fig and rhubarb jam my friend Pauline used to store under her bed for the winter called "Glencar". There are plenty of recipes online for fig and rhubarb but the Glencar remains elusive. I could take Nell's advice instead - "The best idea when there is a surplus of rhubarb is to combine it with something a shade more recherche". Her italics. She suggests angelica or blackcurrants or orange.

I was under the impression rhubarb season ended much earlier and have just let ours go. But now I see loads of people are still picking, so it looks like I've missed a trick.

I froze rhubarb compote last season with great success. Would love to give jam a go, but I still haven't overcome my jam-making fear!

this is my mothers recipe

Cut up figs very finely, also rhubarb and peel, put altogether with sugar and let it stand for 24 hours.Then boil till set

Jonathan you are a star. Thank you so much for letting me have the recipe. I am planning to beg some more of Emily's wonderful rhubarb as mine simply does not want to grow.

She's been making it since the 1970's and apart from crumbles it's where all the rhubarb gets used. I'll be making my own batch, for the first time, this weekend

I simply must try this Glencar recipe now...