I wanted to visit the memorial for the victims of the 7/7 bombing on Tuesday, so I asked a park colleague where I could find it. She sent me off in the direction of the Serpentine: west then south then east again to the other side of the water.

I followed her instructions. It started to rain. Damp joggers and tourists under umbrellas and plastic ponchos passed me by. I marched on looking out for the memorial. It was not bad weather for everyone - the deck chair attendant relaxed happily under a tree in a hammock like position between two deck chairs. The wildfowl -geese, coots, moorhens, pochards - preened and groomed in the drizzle. I marched on, back over the bridge to the north side of the Serpentine. No memorial. After a while I gave up looking and went back to work.

It was a wild goose chase - I had been misdirected and the memorial was in another part of the park altogether.

By mid afternoon, the predicted rains had started. Within a few minutes, there was thunder and lightning and hailstones and a pond on the rooftop outside my window. I waited as long as I could before leaving for home, weaving my way tentatively through the lusciously scented lime trees. Nobody mentioned that the rain would run off towards the Serpentine, the dammed river Westbourne, in such volume that I would have to leap and ford the water to reach the park gates. 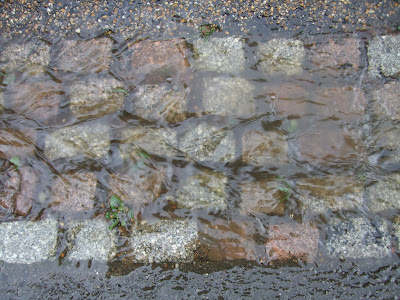 My shoes were soaked by the time I reached Piccadilly but even I was not as bedraggled as the women making their way home from the Queen's garden party. Silly geese.
at 23:21

The media wrote glowing things about the memorial. I'd like to see it at some point. Yes, those rains really were monsoon like!

Did you get to see it in the end? The pictures of it are impressive.
We have had many downpours and phone and power problems due to lightning strikes. Summer...

Actually, I still have not found it. But I will very soon.