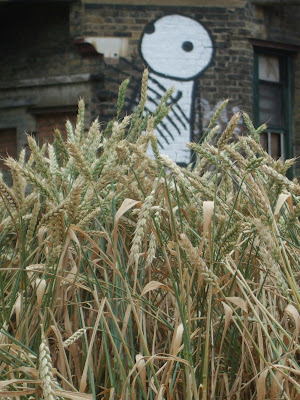 Just off Dalston Lane in Hackney, there is a little patch of old railway land, wedged between the shopping centre and the main road, in which a small wheat field has been planted. It's scrubby land, most of which had already been colonised by buddleia and brambles, and no doubt a share of discarded junk. It's just the sort of corner that catches my eye, reminscent of the bombed ruins that I thought of as countryside when I was a child.

Towering above the wheatfield is a windmill and when the wheat is ready to harvest in a couple of weeks time, bread will be made from a little milling machine. 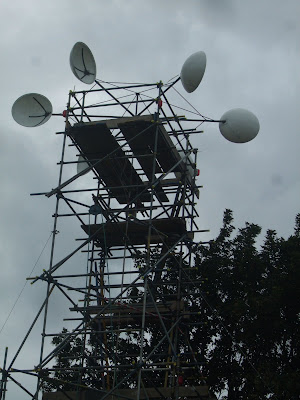 This is the Dalston Mill, part of the Barbican's Radical Nature exhibition where I suffered such a severe bout of shed envy. Like Agnes Denes' Wheatfield, it provides a reminder that even the smallest slice of land, seemingly abandoned, can be fruitful.

Madeleine Bunting wrote about it last week, referring to the way that the arts can raise awareness of climate change and sustainability, and suggesting that projects like this may have more success in reaching those unpersuaded by the science. That remains to be seen, I guess. As far as I am concerned, having a wheatfield up the road, even if it is transplanted from elsewhere, lifts me - especially after I see lovely corners of the city wantonly destroyed. (I didn't mention the weedkiller applied to the land on Cable Street with the carpets of violets, leaving it completely barren. Or the willow tree that grew from a cutting discarded on a piece of waste ground, now smashed down. It makes me want to weep.) 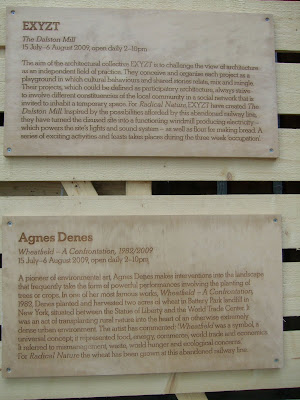 So more wheatfields. More weeds and wild flowers. I'll put up with the hay fever.
at 01:49

This was fascinating to learn about - thank you for sharing it!

So sad about the violets, the willow tree.

I was surprised to find that buddleia grow wild there. We call it butterfly bush and summer lilac. I'm sure there are different varieties, but all in all, it must be a pretty weed.

Its a shame the windmill doesn't seem to do much milling,as the amount of wind there being very little.And the design of the wind capturing parts total swept area is so small that unlikely they will get any useful energy out of it,that they claim.Never mind,I suppose its art,what does artists have to care about realities?

TT
We did see the little mill working and they were grinding some wheat while we watched. I think they also use the electricity generated to power the lighting in the late evening. You're right to say that there is not much electricity, but there's plenty of power in the concept.