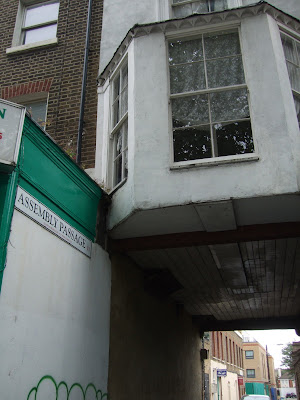 Going back a week or so, this was the next stage of my (picture heavy) homeward journey, turning south off Whitechapel Road and into Assembly Passage. If I were describing this legacy trail by scent, I would have mentioned the time when Whitechapel smelled of malt from the local brewery - there was a line of breweries dating back hundreds of years along a spring line . I can clearly remember cycling through the malty haze on my way to work in Hackney Wick. Assembly Passage on the other hand was full of picklers, only recently disappeared.

Assembly Passage was a good short cut to drop south when my journey to work took me across the river. It runs under the old assembly rooms where, John tells me, on the authority of no less a person than the Bishop of London, political clubs used to meet in the late eighteenth century. You can even find ghost houses. 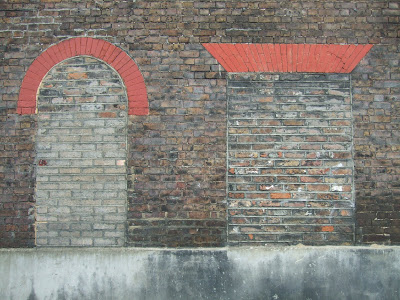 Circling back again to Stepney Green through the backroads, one end is lined with grand restored houses. Forty years ago they were rather less grand - one of them, possibly this one, was the local careers office where I went to get my first national insurance card. 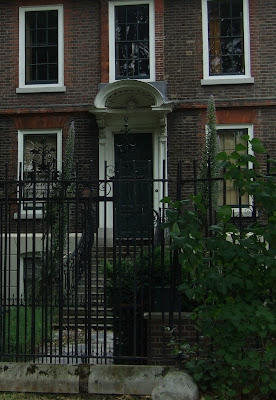 I've always liked this little neck of the woods. It lives up to it's name - it is greener and quieter away from the mayhem of the main road. And it has probably the best bit of road paving in the whole borough, lovely faded blue crackled bricks 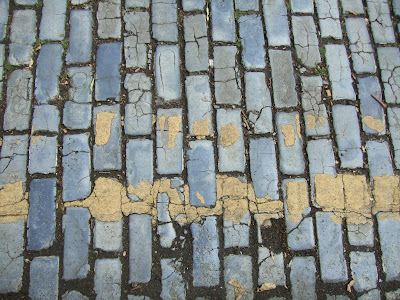 Further along is Stepping Stones farm, probably the least glam of our local city farms, constantly struggling to stay solvent or, most recently, holding off threats to take over the land as a dump for waste from the CrossRail project. One corner of the farm still has ruins from the old school and, all round the edge, shoehorned into the tiniest spaces, are little vegetable gardens, admired longingly by the young goats in the field beyond. 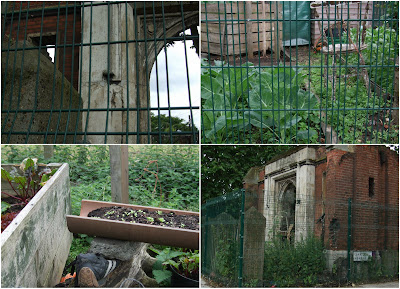 I decided to walk back to Mile End Park through the Ocean Estate, what would once have been called a "council estate", the oldest blocks of flats similar to the ones I was brought up as a child, but rather more romantically names after seafarers, seas and oceans - Pacific,Arabian, Ionian, Barents, Bengal, Bothnia, Bantry, Solway. Bits of it are run down and waiting improvement, even so, people have made little gardens and grown tomatoes on back balconies. And leave little signs of hope. 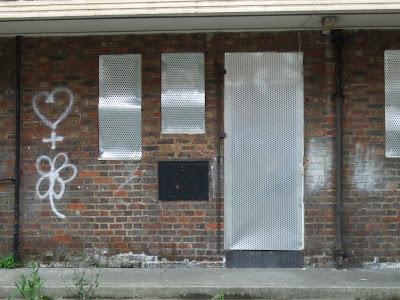 For the last bit of my walk, I snuck into Mile End Park and went in the sense garden, just tucked away from the main road. There are little nooks and crannies, with people taking the chance of a bit of peace and quiet, young couples and older people enjoying the rather luscious planting. 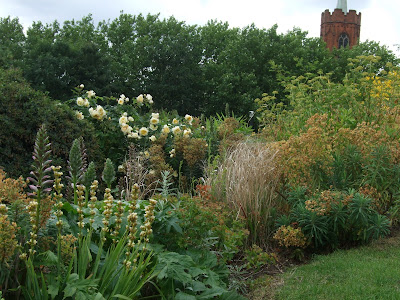 And on the pond, look closely, a moorhen nesting and her mate bringing her food. 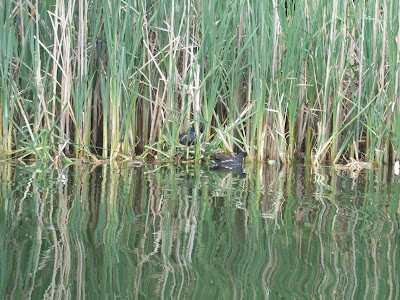 After that, over the green bridge and home for me too.