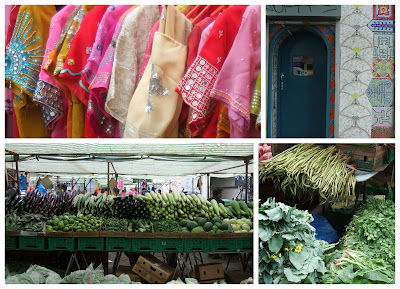 I cannot tell you how glad I am to have escaped from work for a short holiday. It started last Friday with a visit to the Whitechapel Art Gallery for coffee with women from East End WI, a literally moving feast as the group meets at different cafes around the local boroughs. An important part of the ritual is testing the cakes - nine out of ten for the chocolate brownies, the highest score yet, and if you were to ask me, ten out of ten for the helpful staff, good company and location.

Revisiting the gallery after the incorporation of the Whitechapel Library building into the gallery proved to be curiously affecting. Here the private dining room - once the children's library; this smart restaurant - the space once used by the outreach team, preparing for visits to hospitals and the housebound. This spinning back into familiar spaces might explain why I felt so moved by the Guernica tapestry and installation and the idea that people were asked to leave a pair of boots for those fighting in the Spanish Civil War when they first came to see Guernica at the gallery in the 30s.

Walking home, in territory both familiar and changed, I stopped to admire an 18th century street sign and got into conversation with another woman, a painter, also taken with the history of the place. It is complete fallacy that people who live in London do not talk to each other. 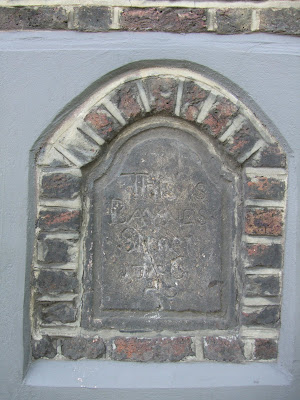 I carried on past the Mosque, through the market, seduced by the cheap scarves and sequins. Some of the stalls had been covered up and left unattended while the stall-holders went off to Friday prayers - another myth busted. To the east of the Blind Beggar pub, the "waste" takes on a more rural appearance with plane trees lining the pavements, the Trinity Almshouses clustered around a green ( I wanted to live here when I was a child), restored Queen Anne houses rubbing shoulders with the old facade of the disappeared Wickham's department store on one side and PC World, Halfords and Currys on the other. A group of young girls asked me to takes photos of their birthday celebration with their mobiles. A young man wearing black gloves,very politely, asked me if I would like some company while I was walking. I, equally politely, declined.

By the time I reached Mile End, my shoes were rubbing and I climbed up "New Globe Tavern Gardens" mound, disregarded the detritus and listened to the birds. When I arrived home, a couple of presents from John - a Post Office poster and a jutey bag from the Women's Sewing Project, perfect for picnicking. 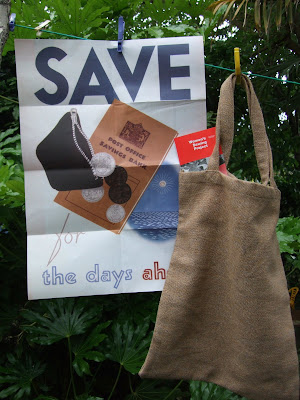 We used to go to the Whitechapel Art Gallery when I was a kid, to the summer open exhibition. The man who lived upstairs from us (on the 15th floor) was the dockers' leader Jack Dash who was also an amateur painter and who would encourage us to go, especially if he had a painting on display. Went recently to the reopened gallery and was very impressed by the British Council collection and also the stuff by Mark Gertler and co. The art packs the gallery provide for children really are a cut above. Not just paper and chalk and pens and bits of perspex (to gain a different perspective) but inspirational ideas. We were there with 5 children under 12 and all really enjoyed it. All for free too. I would advise anyone taking kids there to ask for one of the packs at the desk.

We really must visit the Whitechapel again. It's been years and years. Our last visit was definitely pre-renovation.

Very envious of your WI group! How I wish I had one here to join. And I love your new poster.

Couldn't agree more about people in London being chatty old things once they get going!

I ventured to your neck of the woods last weekend and had a lovely picnic in Haggerston park - god the herbaceous borders there, against a huge brick wall, already looking lovely.

I'd say that was an excellent start to the holiday. And you are absolutely right about those fascinating and random London conversations. (Another of the things I miss about my home town!) Here in the depths of the countryside, strangers are probably more likely to say 'hello' but most casual conversations rarely extend to much beyond the weather.

Joan - Let's hear it for the Whitechapel and Jack Dash. I'm proud to day that my boy was encouraged by his dad to shake the great man's hand.

Kristina - Set yourself up a WI! I'm sure my mates here would be happy to offer advice.

Emma - Woudl you believe it - I'v enever been to Haggerston Park - just a little bit out of my paths of desire. But I'll make a point of going now.

D- just hink of how many random conversations you'll be able to have when you move back!

A good start indeed. I think a holiday at home is a brilliant idea.