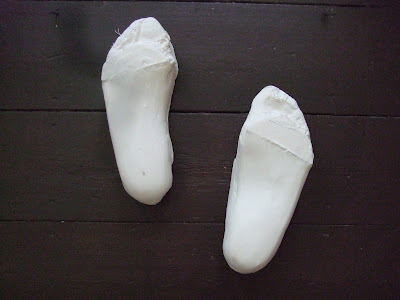 I had not intended to spend my holidays doing housework, but after a week of painting the floor in our bedroom, retrieving and re-assembling the furniture and its contents proved to be a longer job than I had anticipated. I thought that the traditional Good Friday frenzy of cleaning would have done the trick but somehow it went on ...and on. There were bags of recycling, decisions to be made about what was demoted to the cellar and what was reinstated. There were clothes to be retrieved from under the bed and others to be put away in their place, optimistically, for the summer; more clothes and sheets assigned to the mending pile, and others sent to charity; and imagined clothes - fabrics and patterns - mentally admired in front of mirrors and stored away for making another day There were photos and pictures relegated or promoted to more prestigious sites, and old letters and books tucked away again for sentimental reasons.

Then there were more peculiar discoveries - these plaster casts which were meant to be a "prescription" for making corrective insoles. They put me in mind of Rachel Whiteread's House which was made just up the road from here. I think of House quite often. For a start, it smelt of London, a kind of damp and dusty scent. And then there the little domestic features, locks and window frames and those little snickets for closing windows that you have to wipe and dust around, the sort of features you pretty much ignore unless you are cleaning them.

So I have been working my way through the disorder, moving furniture, rearranging things to try and create more space out of the same area by shifting and re stacking. Everything was starting to reach a satisfying conclusion, Then, on the final leg, I discovered the treachery of the moth collective. They had eaten into two of my rugs, leaving holes and burrows and nasty little larvae requiring drastic action. What a bad hausfrau I am - I didn't know I had to vacuum under the rugs too (and clearly more often than my normal shamingly infrequent efforts). I'll know better in future.

Meanwhile, we are the proud owners of the poshest weed-suppressing-carpet-cover on the allotment.
at 23:26

Email ThisBlogThis!Share to TwitterShare to FacebookShare to Pinterest
Labels: Allotment, home, pests, too much stuff