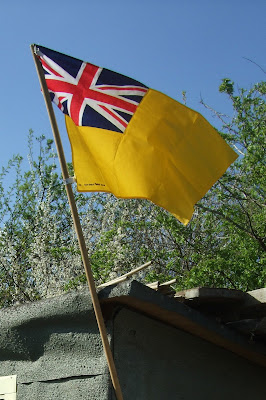 Mudchute Allotments are home to a range of flags, mostly patriotic. This is the Isle of Dogs after all. This flag, however has a rather different background. For a start it's a tea towel. And it's not a permanent fixture. This yellow ensign was sent to John by a friend, the joke being that it was the flag for admirals with no real job - so called beach admiral. That's a little unfair, though. This man is the workhorse behind this plot. I do back-office, project planning, logistics, and light manual work only. He, on the other hand, has dug over this unwelcoming and resistant clay, schlepped and heaved planks of wood and stones on a sack truck, wheelbarrowed in piles of manure, compost and leaf mould, and generally turned a bindweed covered and couchy plot into something that could grace the pages of Garden's Illustrated. Perhaps. With a little imagination.

There are some signs of beachiness around here, though - a small bed with shells and pebbles left over from the seaweed we brought home from the seaside to feed the asparagus. And it looks like it has worked. I was astonished to see it up and almost tall enough to cut so early in April. This is good news, very good news. 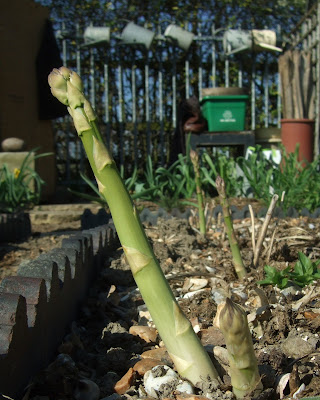 And there's the deckchairs, of course. The potatoes on the left went in to day. They are "Colleen" - how could I resist? The others are Arran Victory, a purple type, 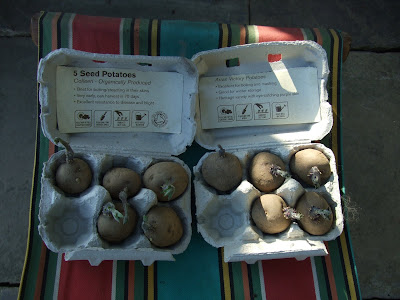 I reckon being a beach admiral isn't too bad a job. 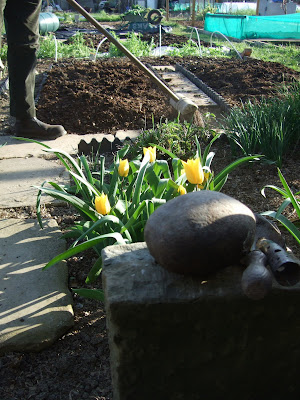 Even if you do have to sweep down the decks yourself while the crew lounge in deck chairs.
at 11:58

I'm so impressed and inspired by your beautiful asparagus! I've never even dared to try and grow it as it is rumoured to be evilly difficult!

Yours looks beautiful though; green spears of loveliness. And it's nice to get the continuity, having read about the beach trip months back, for the seaweed.

Your tea towel/flag is inspired. Here, my 'patriotic' (!) neighbors tend to go overboard with the US flag. I was going to put up a pretty blue UN flag on my porch flagpole, but Tech Support Guy figured that would be waving a red flag at my neighbors. Oh well, I can dream.