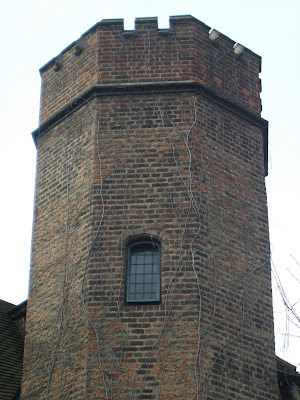 Ever since I came across this tower in Charterhouse Square a few weeks ago I have been unable to get out of my mind the song that accompanied a game we used to play at school, one where we all stood round in a circle and sang our way through the Sleeping Beauty story ... "the princess slept for a hundred years" and so on. I think it struck a chord because I have felt over the last few weeks that I have just woken up from a long winter sleep as the days have been lengthening and spring uncurling. That and the memory of actually acting the part of the Belle au Bois Dormant in a school play where I had to wait sleeping for the handsome prince to come riding by.

Those school games and stories have a long and lasting influence. They instilled a penchant for towers and castellations, reinforced by living so close to the Tower of London I suppose and frequent escapes into my own fantasy world. On holiday with my cousins aged around 10, we stayed in a small bungalow with mini castellations on top of a "cliff". It was thrilling. The cliffs were modest but I felt that I was living in true Enid Blyton style, the bungalow offering the possibility of escape and adventure rather than the more punitive incarcerations of fairy stories.

Neverthless, towers still hold a fascination. In one of our recent walks across the Borough, we went back to see the building where we first set up a permanent home. Keeling House was designed by Denis Lasdun to create vertical communities. It did not quite work like that when we lived there - yes we did talk to each other when we were waiting for the lift, but other than that we led a private life on the tenth floor of our beautiful tower. And in spite of the beginnings of disrepair which led later to the building being sold to private developers, it was a high spec, well designed, comfortable, bright, light space with a spectacular sunny south facing view and not a hint of incarceration. I loved it. 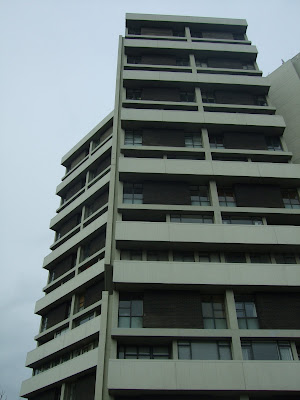 I wonder if it counts if princes come riding by on push-bikes rather than horses.

Thank you so much for your lovely comments. And how did I miss your blog? I'm enjoying your archives so much!

I always dreamed of having a tower room when I was a little girl. Of course it would have looked rather silly attached to our little suburban American house...

You know I have always been jealous of the kids living in European cities with all the beautiful old buildings,and getting to live out some of the storybook life with them all around. I always wondered if they really appreciated it, or it was just there, and taken for granted. Towers are pretty neat I must say!