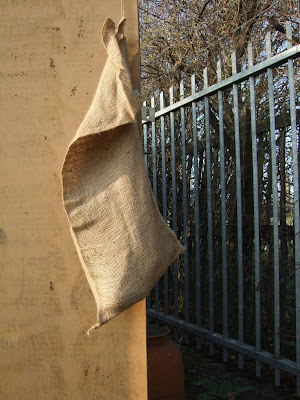 I just love it when meandering through weblinks -in this case via Emma's blog - bring you to to something that excites you. This is all relative of course. I know that not everyone would be quite so taken with finding that it is the UN's International Year of Natural Fibres.

The discovery coincided with some mental meanderings because I had been thinking about jute and string and the stringing of hops that goes on this time of year. I once lived for several months - long ago- on a hop farm in Herefordshire and winter was the time for making the giant balls of string used in the hop gardens. Two of us worked in a drafty loft, me in a donkey jacket and fingerless mitts trying to stay warm, using antiquated winding machines. The skeins of jute arrived pressed together in huge pressed bales (you can see some in this film) and you had to place them on the winder and through some deft shifting of a lever and some mechanical magic the machine would transform the jute into mega-string-balls.

I see that jute may be on the up and up because of the interest in natural fibres. Well, I'm always keen on a nice sack or two and best string. And if "jute producers and processors have made very limited innovations in production and processing technologies" it may mean that someone somewhere has just spent the last couple of months making balls of string for hop gardens. And if they have, I want to find them.
at 23:37