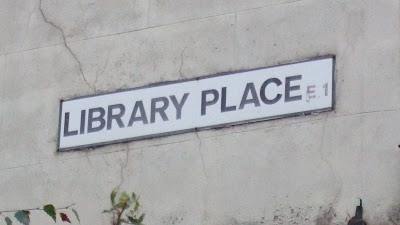 Just down the road from my mum's street is Library Place. When I was in the sixth form, I used to work in the library that was here - St George's Library - two nights a week after school. It was a much prized job, handed down like a sinecure, from one sixth former to another. Respectable girls only, of course. I passed it on to my cousin when I moved on.

The library was not a place of beauty. In fact, it was a pre-fabricated building, put up to replace the library that had been housed in the local Town Hall, bombed during the war. One half of the pre-fab housed a baby clinic, the other half the library. When it rained, it was like being in the tropics with the rain pounding on the flimsy roof. I know this because I used to work there for three hours on Thursday and Friday evenings, a doddle of a job because Fridays were dead quiet and once I'd shelved the returned books that had accumulated during the day, there was not really very much to do. For the most part, it would be me and the relief librarian from the area library, an amateur photographer, talking about books. There would be a few customers - a serious boy who read his way through all the quality children's books, the two girls from the Italian grocers who were obsessed with Dorothy Dunnetts, a rather attractive young man working his way through improving political texts (I distinctly remember Karl Marx's Capital), middle aged women reading Georgette Heyer and middle aged bachelors reading adventure stories, H Rider Haggards and the like.

It was a wonderful job. Covering books, folding and pasting pages into the front of books for stamping the return dates, counting the issue, stamping the books with the insignia of ownership according to strict protocols. Look here - proper paste, proper ink pads, wooden boxes for library cards. And demure handmaiden to carry out said tasks. 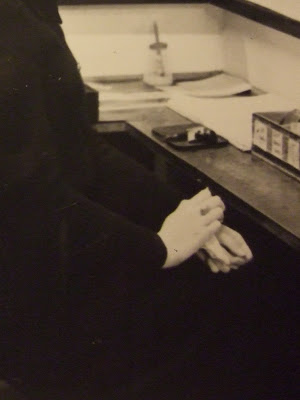 During the school holidays I got to work at Whitechapel Library, visiting hospitals and the housebound, sorting out the Hansards in the dusty basement among the relics of the old museum previously housed in the building, supervising the reference library. This task amounted to little more than making sure that those who had come to get warm and dry at least didn't make that too obvious. Since then I have been alert to librarian heroines - Philip Larkins' "A Girl in Winter"; Barbara Pym's " An Unsuitable Attachment". And alert too to the importance of public libraries, the importance of preserving local histories and collections, and to the opportunities they offered to people.

Now Whitechapel Library has been closed and will soon be part of the extended Whitechapel Art Gallery. Before it closed there were various events in the old Passmore Edwards building, including a recording of people talking about what the library meant to them, for me rather a moving piece.

And what of St George' library ? Disappeared. All that remains is the name of a short alley. To the right, the Britannia, no longer a pub (the landlord was a sweetheart). To the left, on the exposed wall of the bombed building, a mural of the Battle of Cable Street. And where the library was, an entrance to St George's Gardens and some evergreen trees. (You can just about see the beautiful, to me, St George's in the middle picture below.) 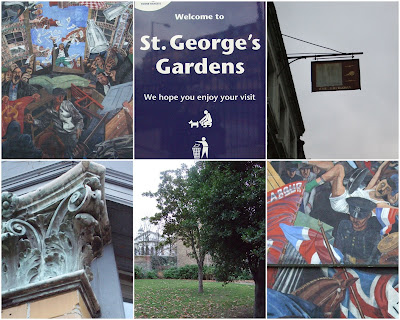 I went to my local idea store today to try to find a book. Idea stores were located to be close to places that people used, local markets, shops. Unfortunately, the large supermarket next to our Idea Stores closed a while ago and the building is depressingly unprepossessing. But it was buzzing with noise and activity, people sheltering from the cold (just like the old days), masses of of people using the Internet, people coming in to borrow DVDs. some people even borrowing books. Miles away, years away, from St George's library.

So while I may have sentimental memories of the library service, it is still doing what it needs to do, bringing people in, opening doors, if somewhat more noisily than in the past. And I found out today that there was no need to have made the trip to the library at all. I could have checked whether they had the book I was looking for over the internet from the comfort of the kitchen.

By the way, I met John in St George's. That might explain the sentimental attachment.

and another thing said...

Sentimental Tosh! but don't I just love it. I wonder if today's users of the Ideas Store will have such fond memories of their use. I hope so. As a researcher into the 70 plus Passmore Edwards buildings I was very interested in your time at Whitechapel and would love to know more. Of course the St Georges library was also a Passmore Edwards library, destroyed, as you say, in WW2. Edwards was very much an anti war campaigner it would have hurt him to see his beloved libraries, a symbol of his war against ignorance, destroyed in that way.

i hope you'll write more about what people said about the library.
i'm such a fan of ackroyd's London, of Martha Quest's epic walks through The Four-Gated City, that it almost brings tears to my eyes to think of the building, the bombing, the library, its disappearance....and replacement with the mural and smooth silent grass.
london. toddlin' town.

Now there's a thing. I had not realised that the earlier St George's library had been a Passmore Edwards building. The internet is a truly wonderful thing.

There is a good description of the library shortly before it closed here http://www.jewishquarterly.org/article.asp?articleid=76

The area still had a large Jewish population when I worked there and I can clearly rememebr the collection of Jewish books, kept in a gallery over the main hall.

As a kid I used the now closed Limehouse Library. It had a mural on the wall but I can't remember what it depicted. What I do remember is that as a special treat library staff would take us into a back office where stood the desk of Dr Barnardo complete with secret drawer. I was delighted when I took my kids to a London Open House day at the Barkingside headquarters of Barnardos to see the desk there.

and another thing said...

I have posted an image of the Mural in Limehouse Library on my website
http://www.passmoreedwards.org.uk Follow the links through to photos on the page for Limehouse library.
Site being redeveloped at the moment but should still work ok. If anyone has any stories about the passmore edwards buildings in London I would love to hear from you. Thank you Colleen for the link to the article on Whitechapel.

Your post strikes me that people who know/love gardens have a lot in common with people who know and love books. There's something special about both, and the only way to understand what that is, you have to jump in.
Your recollections are beautifully told - a lovely epitaph for a lost neighborhood anchor.