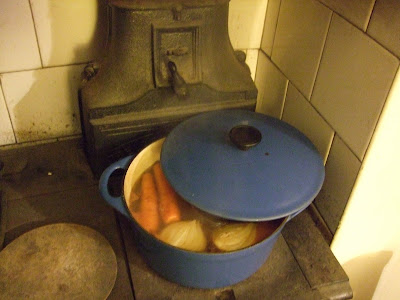 Me: Tell me the story about the cider press.

Him: You're always asking me about this.

Him: Well, I looked into the caretaker's office - it's just a big cupboard under the stairs really - to find all three of them hammering, filing and sawing. It was like something out of Snow White and the Seven Dwarves. "What have the kids broken now?" I said "Nothing's broken, we're making a cider press. X's father in law gave us some windfall apples from his garden." The press was made up of: an oak-slatted outdoor litter bin set in a stainless steel draining board from one of the labs. And to press the apples into the litter bin so that the juice ran into the draining board, they'd adapted a carjack that had been thrown over the fence into the grounds. The amazing thing was that, in spite of all this, it actually worked and they made 2 gallons of cider. A few months later I collected my share - a bottle of cider . Now they've got the bug and have moved into bulk beer and they've managed to make 44 gallons in the boiler room. One of them complained about how much beer he'd had to drink to collect the bottles. The boiler house looks just like a brewery.

Him: They're good boys those caretakers. They run the place properly.

At this point I roar with laughter. Time after time.

It's the way you tell it.