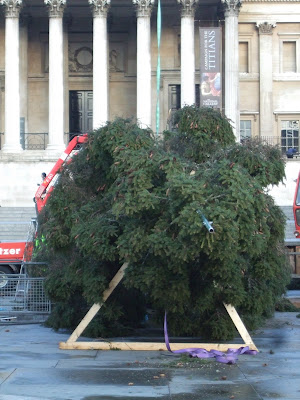 It's been busy in Trafalgar Square this week. I noticed this on Monday morning. 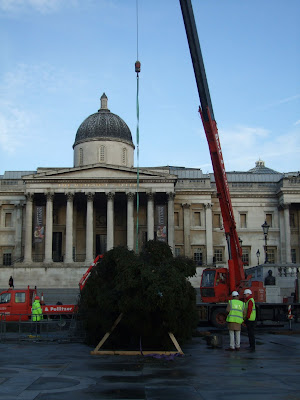 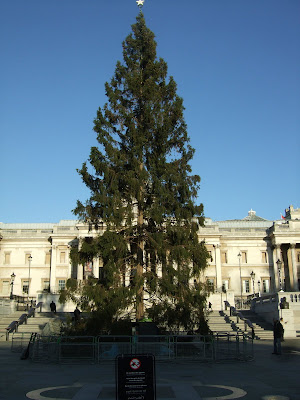 And by lunchtime this lonely looking tree. 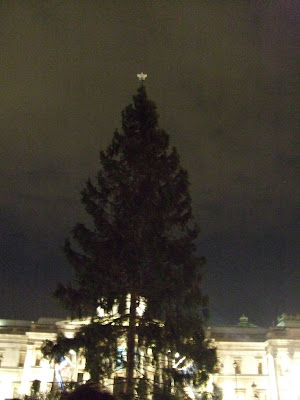 Tonight on my way home, the square was dark but filled with people, a band playing somewhere in the corner, the crowd joining in Good King Wenceslas. The sound of trumpets - or was it cornets? - announced speeches from grand people, mayors and the like. We heard that this was the 62nd tree of friendship from the people of the City of Oslo to the citizens of London, lit up on the first Thursday of December. A present for me and millions of others from the forests of Oslo.

I've never knowingly met a Norwegian before, but the lady next to me in the crowd told me she was from Oslo. She had lived here for years but this was the first time that she and her daughter had come to see the lighting of the tree. Me too. She talked about hiking in the forests and the way that they only had white lights on their Christmas trees in Norway. We both urged them to get on with the speeches as our feet were cold and wet. 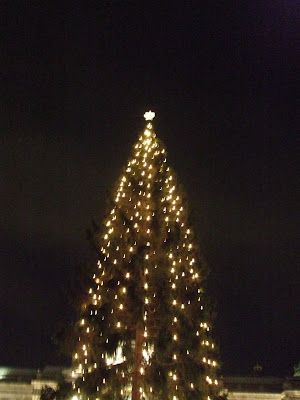 As the lights went on and the crowd cheered, we both found ourselves rather moved and a little tearful. We shook hands as we parted and wished each other a Happy Christmas. 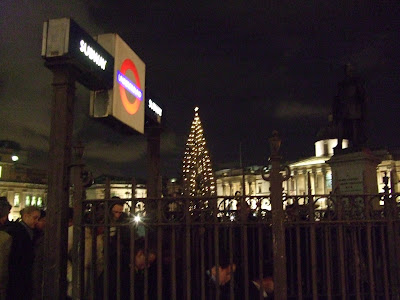 Then off we all went.

I give you the most famous Christmas Tree in the world (probably).
at 23:51

I love "I've never knowingly spoken to a Norwegian"! My friend Emma who is Swedish, but can speak Norwegian, says that London is full of Swedes and Norwegians who keep their identity secret by looking exactly like us and speaking English with no accent. She sometimes detects them when they break into their home language, which she can then understand.

I met a lot of Norwegians in Norway. I always say "hey" for hello, and didn't realise they do too - i just thought they were being polite and replying to me in my own parlance...

There is a possibly more famous tree...
http://www.greatfallstribune.com/article/20081125/NEWS01/811250304/1002/news01
The US states take it in turns to supply the one on the Capitol. Montana schools handmake 5000 decorations! Those LAZY Norwegians, they don't even send us a glass reindeer

Oh dear. Now I'm on the look out for the hidden Norsemen and women.

Enjoyed the tree story. I'm not sure I've seen it yet, myself, though work kind of in that vicinity of the West End.

Oh, more nostalgia - and something else I miss about my old home town. We do have a rather lovely tree in the centre of the village each year, dressed by local children. But it's a very recent innovation and doesn't have any history!

I stumbled over your blog today and am enjoying myself while reading "backwards in time".

I had to make a comment on this post, I'm Norwegian and this brought back memories. In the early 70's, our family lived in London. I remember one year I was to participate in the official lighting ceremony. I can't remember if I was to hold hands with other Norwegian children and walk in circles around the tree singing christmas carols or what my role was. But I can remember being dressed in my national folk costume and arguing with my mother. She made me wear a white turtelneck and a thick white pantyhose underneath the dress. She was right of course, you need several layers in December.

Tone - thanks for your charming story. One thing about blogging is that the memory is much more stronly imprinted when you write about it. Next time I see the tree, I'll think of this story ...