over the garden wall 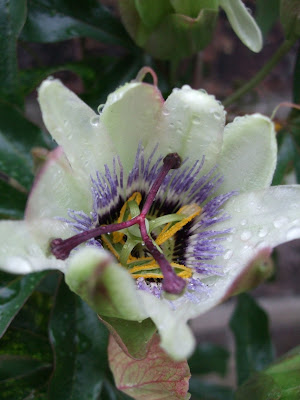 You may have noticed my interest in plants which grow in cracks in brickwork, through fences, peep over garden walls.

There used to be honeysuckle growing over the wall of the garden at the end of my street but it disappeared a few years ago. The scent of that honeysuckle as I turned the corner in the evening became a marker of home and I missed it when it disappeared. Then a few mornings ago I realised that the unremarkable vine that had replaced the honeysuckle was in fact a passion flower and the last few days of September were warm enough for it to flower, in the garden, I imagine, and over the garden wall for everyone else to see. 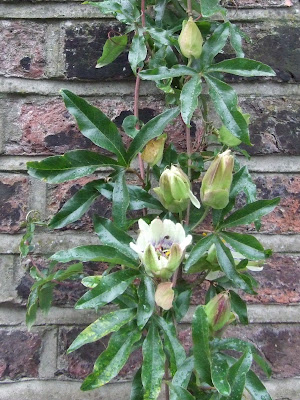 It isn't just the flower that takes my fancy but the bricks too, darkened by years of grime, red and irony, the variation in colours a result of the rubbish put into the mix before firing. (Don't be over impressed, I didn't know that until I did a search). But my infatuation has been sufficiently long-lasting for me to recognise the psycho geography of bricks, Just think of their names - Staffordshire Blues, Cambridge Whites, London Stocks. Colour, place, texture, meaning.

I met someone the other day who had been collecting bricks for years and had managed to amass three hundred of them, left in his mother's shed and in a quandary about what to do now that the house was being sold.

Think of the fun you could have playing with those bricks. Stamps would take up less space, of course, but I can see the attraction. Or even the passion.
at 21:03