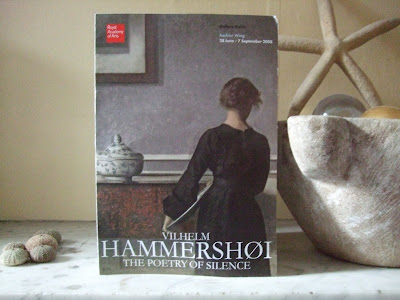 I sneaked off of work early on Friday afternoon, legitimately I might add, but even so I felt as if I was playing truant. I wanted to see the Hammershoi exhibition before it finished. So off I went in the rain, up Lower Regent Street, along Jermyn Street, past Bates the Hatter, on to Piccadilly and into the gentile and hallowed halls of the Royal Academy. It was packed of course, as I thought it would be, as it always is on the last few days before the end of the exhibition. Elderly lady artists with pearly white hair; lunch hour visitors; mothers educating their daughters before they went back to school. But even among all of those people, peering and interrogating, the paintings managed to create a sense of calm and space. There were landscapes and cityscapes, the streets empty of people. And uncluttered domestic roomscapes, so beautifully composed that they made me want to sit down and breathe slowly to take them in. Which is what I did. I was left wondering though how easy a man VH was to live with - that orderliness and erasure of signs of life, both controlled and, I suspect but don't know, controlling. I read that Ida, his wife, used to have fits of temper. I'm not surprised, somehow.

When I came out of the RA, it was raining and I went and had a cup of coffee to mull over what I had seen. On the way home, I was still so spaced I managed to miss the interchange at Holborn and had to double back. Which was a bit annoying because I had to make a hundred choc chip cookies for the WI tea stall today (more of which later).

It was lovely to have the rest of the afternoon on my own, baking and listening to a ghost story on the radio. My own space. But those cookies drove me mad. I tried two different recipes (here and here) and ended up with a blister from chopping up the chocolate. As for getting them to come out the same size ...what a nightmare. 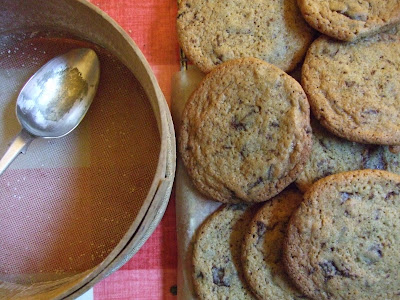 They were fine in the end, though like Hammershoi, I cropped the picture to cut out the chaos and leave the semblance of a little bit of domestic bliss. Which, with or without the mess, it was. Honestly.

PS If you have a better choc chip cookie recipe, I'd be interested. I thought these were going to be a failure but then I realised that you have to leave them a good while for the chocolate to harden after baking. The H F-W recipe gave the better texture but was too sweet, though the boys in this house liked them; the MS cookies (chewy choc chip) were a little "flatter", but more chocolatey.