During WW2, the government encouraged people to "holiday at home" - as if they had any choice to do otherwise. The idea was that councils set up summer schemes to substitute for being unable to get down to the beach, most of which were barricaded off because of the threat of invasion ( however remote). People were also encouraged to have outings locally - picnics in the park, walks through the woods, dances on the green. So I thought that over the next few weeks - and to avoid the procrastinating distraction of taking too many new photos when I really need to get my head down and pull my dissertation together - I'd do a couple of things. Post some text light holiday-at-home snapshots (I'm not going away on holiday this summer) and also have a trawl through some shots that did not make it the first time round for one reason or another, a kind of retrospective. Hope that suits.

To start off, and as an alternative celebration of the start of the Olympic and Paralympic games on Friday, take a look at this lovely little film of holiday-at- home sports day in Gateshead during the war (you may need to download real player). There are egg and spoon and sack races and boys and girls running to win. I promise it will make you smile.

My own holidays at home as a child featured the riverside more often than not. There was a sandy beach alongside Traitors Gate by the Tower of London, reached by a set of wooden steps lowered when the tide was out. Our mums hired deckchairs while we children - and I can hardly believe this - paddled and splashed in the River Thames. Amazingly we all survived without contracting any deadly diseases.

To the riverside then. I walked took a couple of weeks ago from Charing Cross Railway Bridge to Southwark Bridge along the South Bank where its holiday time every day of the year. There was plenty going on - you could take your pick of buskers, from Ave Maria on the cello to Irish jigs on the fiddle. And all sorts of distractions for tourists, like gallopers Linda and Anthony. ( Are those names strange or is it just me?) 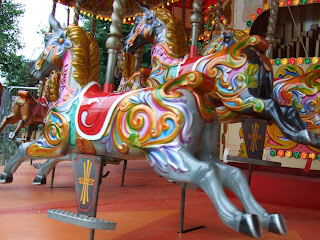 Skateboarders under the National Theatre. 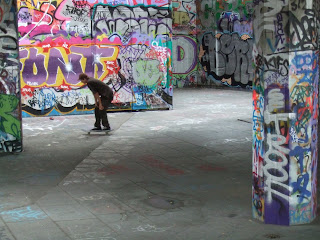 Outside Tate Modern, plantings of birch trees, swishing and swaying in the breeze. 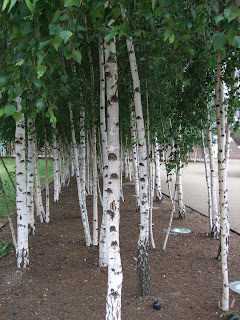 Globe thistles peeping over the wall over a secret garden, just by the side of, erm , the Globe Theatre. 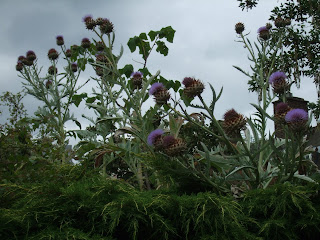 And a display of good manners from the sand sculptors who optimistically work on the tiniest bit of sand before the tide comes in again. 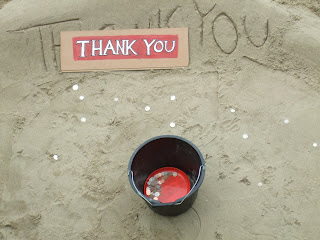 Enjoy your holidays, at home or otherwise.
at 09:04