holidays at home 5: the allotment 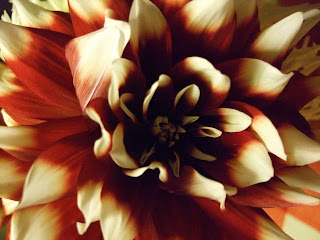 So here we are. My 100th post. And it feels fitting to record it, where it started so to speak. Even if only in the virtual sense.

Any visit to the allotment is a holiday as far as I am concerned. Catch it when there's nobody else around and you could be in another country. It does not look its pristine best this time of year, but then when we started out it was pretty barren. Now it's positively overgrown with tomato plants bending over with the weight of unripe fruits, squash vines climbing up redundant pea sticks and the patty pan plants invading the leeks. The asparagus have avoided attack by beetles. The potatoes have been fantastic, the dahlias have survived their transfer from Manor Gardens (the one above is an MG survivor) and, though you have not seen them yet, the sunflowers are on stage.

I forgot to take my camera when we went a couple of nights ago but I do have some mementos waiting in the kitchen. Note the monumental kohlrabi which I thought was purple sprouting broccoli - and admire those pretty patty pans. 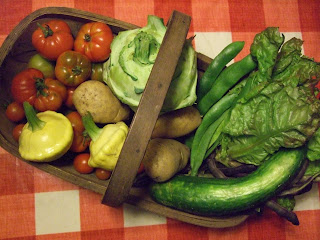 If only I was not such a slatternly housekeeper most of this would be pickled or preserved by now a la Nell Heaton. According to Nell in the last week in August I should be thinking about preserving eggs in waterglass, making marigold cream cheese, stuffing marrow flowers, concocting banana chutney and finding just enough time to make some mulberry syrup. Strangely enough, there are mulberries in our garden, from next door's tree. But I'm on holiday, aren't I. It says so in the title.
at 20:31

Happy 100th and what an impressive harvest. I remember growing kohlrabi one year (when we had a bigger garden to play in) but didn't have a clue what to do with it.