a chorus of sunflowers

I know I've waxed on about sunfowers before but I have just discovered - maybe even created - what must be the collective noun for sunflowers. This chorus were clearly poised for a musicfest of some sort. John and I both thought (independently) it was Handel's Hallelulujah. Young John and his friend were more inclined to something from a Disney production or Zippitty Doo Dah. 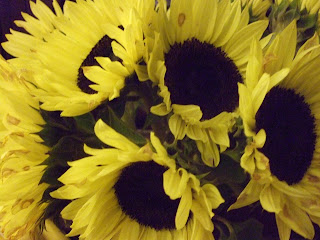 Email ThisBlogThis!Share to TwitterShare to FacebookShare to Pinterest
Labels: flowers

I would have to agree! I planted them one summer and loved how gorgeous they were when you looked up at them against a blue summer sky. Well put.